POLL: In Just 3 Weeks, Sonko Has Fought With Eng. Kamau, Hassan Joho and Caroline Mutoko… Is Sonko The Problem? 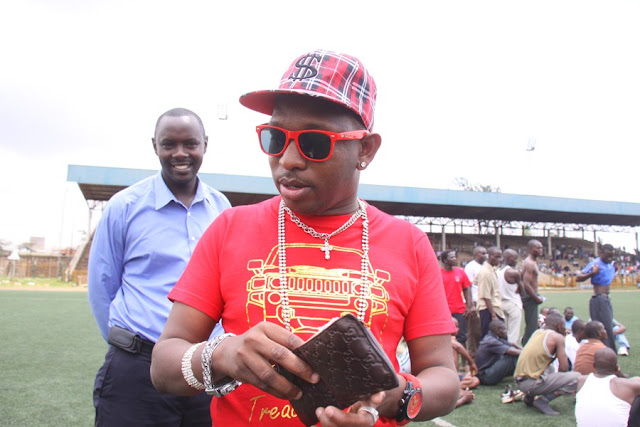 About three weeks ago, when President Uhuru was in China, Sonko was reported to have nearly beaten Cabinet Secretary Eng. Kamau… reports Nairobi Wire largely ignored as gossip.

This is how Jackal News reported the incident.

After Sonko greeted the secretaries, he refused to shake hands with Kamau and instead confronted him over the recent “unlawful” demolitions of houses along Nairobi’s Southern Bypass to pave the way for a new road the overnight eviction of grand-conman from the  duty free shops at the Jomo Kenyatta International Airport, prompting the intervention of Kiambu Senator William Kabogo, Bungoma Governor Ken Lusaka and parliament majority leader Adan Duale to end what would have culminated into a scuffle.

As the Kenyan delegation watched the drama unfold, Sonko explicitly told Kamau: “The Southern Bypass demolitions in Langata and that of duty free shops at JKIA will haunt you and your family forever,” sources said, explaining that the flamboyant kid unleashed an upper-cut on the cabinet secretary, but the boxer-like Kabogo stood between their way.

“Wait we reach home and you’ll see. I only fear God. You can’t stop me from discharging my duties. These are the same people who voted for us and this government; in fact when we reach home you will know me.

Apparently, a visibly shaken Eng. Kamau did not respond.

Four days ago, Sonko was at it again, this time with Mombasa Governor Ali Hassan Joho. It was during a ceremony where the president was awarding title deeds to residents, at Khadija Primary School Grounds. Sonko and Joho nearly came to blows, before their respective bodyguards separated them. There were conflicting reports that Joho gave Sonko a knockout jab.
All this was apparently in front of the president.

This is how the STAR newspaper reported the incident.

Sonko said Jubilee has proved Coast leaders wrong after the residents voted for Cord in the March 4 general election. Sonko told off Joho and Cord leaders for opposing the issuance of title deeds to Coast residents saying the leaders have hundreds of acres in Lamu.

He said Joho should withdraw a case against Mombasa county workers who were arrested when they went on strike. Emotions flared up after nominated Senator Emma Mbura said she will pursue a degree ahead of 2017 general election. The statement is said to have been motivated by Sonko to castigate Joho in regard to a case where he is accused of acquiring his academic degree fraudulently.

Joho dismissed Sonko and the two pushed each other before they were separated by their respective bodyguards. The two are said to have argued at the Mombasa ASK show ground during the official opening of the show by the President. A source told the Star that Sonko was angered after a section of the youth addressed Joho as ‘his Excellency’. Sonko said the title is reserved for Uhuru. Joho said Mombasa people love him.

Now yesterday, Sonko calls KISS 100 and hurls unprintable insults at morning presenter Caroline Mutoko.
This time round, Sonko was angry with Mutoko’s line of questioning, and her co-host Chipukeezy’s jokes on his daughter Saumu.

This is how Nairobi Wire reported it.

This is what happened, Caroline Mutoko had called him to enquire on why he likes giving handouts, and whether his actions serve to benefit the people in the long run.  She wondered how Sonko can be attacking the government, yet he’s in a position to influence policy.

He then attacked Mutoko’s lifestyle, saying that the Kiss 100 presenter loves her cigarette. “You are manner-less you also smoke cigarettes all the time!” he said. Sonko then asked Mutoko what she does with her Sh1 million salary. “Unapata salary of 1 million what do you do with money.” Mutoko denied earning that much though. At some point, Sonko asked Mutoko.. and I quote, “Who fu**s you?”

After Mutoko, it was Chipukeezy’s turn to receive some bashing from Sonko. “Hauna right ya kudiscuss daughter yangu in that studio,” he said, referring to the comedian’s references to Sonko’s daughter Saumu, both on TV and Radio.

Sonko then made these closing remarks. ‘Wewe kwenda! Wewe mjinga kumbaff!I am going to deal with you and Chipukeezy” I will deal with you personally! Wewe nyege zako  peleka carnivore na sigara zako huko!  … loosely translated to, “Take your ‘horniness’ and cigarettes to Carnivore”

In all the three instances, it’s not about him. The senator was defending someone or something.

However, it seems Sonko has taken his crude methods to the high table. We were used to seeing him sleep on tarmac, beat walls and climb gates, but this we had not seen.

Is Sonko The Problem???

Timeline of Events Before and After Sonko’s Melt Down on KISS 100 < Previous
Sonko Castigates Caroline Mutoko For Earning Sh800,000 a Month and Spending It All With Her Family Next >
Recommended stories you may like:

You Will Be Arrested if Found Without a Mask – MoH