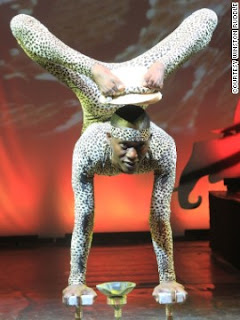 (CNN) — The “Snake Man” is real. The mythical creature with the body of a serpent and face of a human folds himself into a tight coil for the gasping crowds, before slithering into his next impossible position.
Or at least, that’s how it seemed to circus manager Winston Ruddle when he first saw the homeless boy dressed head-to-toe in a snake skin suit, performing on the streets of Mombasa, Kenya. 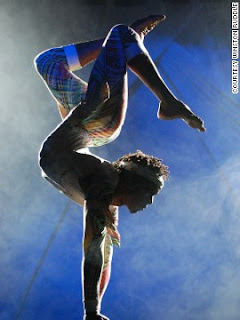 “I had been in the circus business since the 1980s and I’d never seen something like Lazarus,” said Ruddle.
“It’s not so common to find a flexible man — most contortionists are females from Mongolia or China. He was so unusual.”
Read: Mongolia’s mind-bending contortionists
While other professional contortionists spend years training in specialist schools from just five-years-old, Gitu learned his trade while living on the streets aged 14.
An orphan whose mother had died from Aids and father from old age, Gitu learned to bend his body into incredible positions from watching other performers busking.
“I noticed I could do better than them, and I started training on my own,” said Gitu. 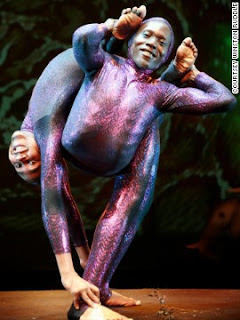 “I was on the streets for six years with other boys and they all depended on me as their star show — it was how we made money to survive.”
The freakishly flexible teen became something of a legend on the streets of Mombasa, and when Ruddle came to the city looking for performers for his new circus troupe, he was quickly pointed in the direction of the “Snake Man.”
Ruddle, a Zimbabwean-born former acrobat with dreams of creating an all-African circus that would tour the world, auditioned more than 300 performers that day. None impressed him.
“Then somebody told me about this street performer, this ‘Snake Man,’ so I went to see him. I was amazed,” said Ruddle. 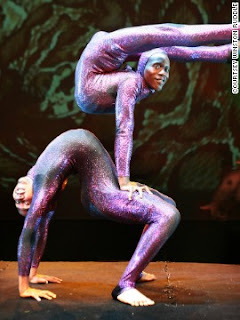 “He had all the goods but his act still needed some polishing. I invited him to come back to Tanzania with me and train at my acrobatics school.”
Watch video: Stars of Cirque du Soleil
Three years later “Mama Africa” was born. Boasting around 50 performers –including acrobats, aerialists, clowns, and magicians — the tribal-inspired show has toured across Europe, Australia, and come this December, Broadway.
“The circus has changed the lives of many street boys,” said Gitu. “Now they see a future as performers, they can travel the world, meet others artists, and earn decent pay.”
While all the elaborately dressed “Mama Africa” performers display remarkable strength, stamina, and skill, it is the “Snake Man” who has carved a name for himself off the stage, regularly appearing in variety TV shows across Europe and the United States. 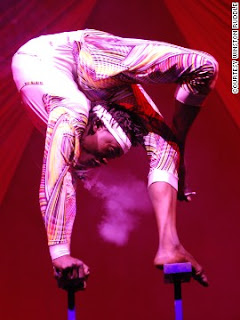 Sometimes performing with fellow contortionist Hassan Mohamed, the “Plastic Boys,” as they are known, bewitch audiences with their fantastically flexible maneuvers.
Indeed, from cramming himself inside a tiny glass box to leisurely bending his legs backwards over his head, Gitu appears to be an otherworldly creature made entirely of rubber.
“The audience is mesmerized — some are shocked and some are afraid of what they see,” said Gitu.
“But contortion is not dangerous if started in early childhood. Today I usually train for around one-and-a-half hours a day.”
Despite the bright lights of the Big Top, circus life can also be less-than glamorous, with the Mama Africa performers usually living in four double-decker buses as they travel across the country.
“We have around 10 people on each bus –the top deck has the beds, and below is the kitchen, dining room, lounge,” said Ruddle. “It’s more like a big family.”
For Gitu, the circus has also given him the chance to build a permanent home, recently buying a house in Tanzania.
It’s a long way from the streets of his youth. And it seems that much like the biblical Saint Lazarus — said to have risen four days after his death — this Lazarus is also embarking on a remarkable new life.