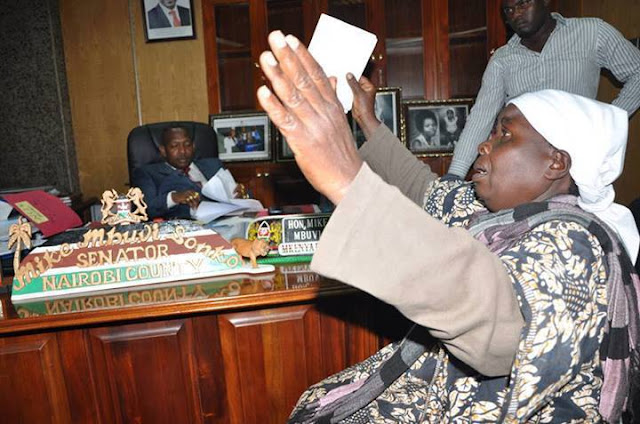 Following his outburst on KISS 100 on Thursday morning, Nairobi Senator Mike Sonko trended the whole day.
In the afternoon, Caroline Mutoko wrote a post on her Facebook page about the senator’s behaviour. Last evening, Sonko responded.

In view of Caroline Mutoko’s earlier post the reason as to why I called KISS FM was to complain about the discussion going on about my daughter and not to be interviewed. I have attended other interviews and reacted positively towards them.I have always reiterated that I won’t allow anyone to joke around with my family. Previously on the same show, they discussed how Chipukeezy will impregnate the President’s daughter and today they discussed the same in respect to my daughter. This prompted me to respond not out of anger but out of love for my daughter just as any father would do. I appreciate the fact that he’s made an effort to issue out a public apology but the damage has already been done.

I wish to state the following; I’m a man of the people and by abusing poor Nairobians saying that they are coming for the handouts in my office made me get annoyed. I don’t like seeing people suffering so when a person comes all the way from Rongai or any other far place to seek my assistance on school fees, land problems, medical attention, business capital etc, I always try my best and give them bus fare and at least something to eat that day. There is no way a poor woman will seek education assistance for her daughter or son and I fail to give her pocket money or a shopping voucher .Not every woman is as rich as Caroline, earning over 800K and spending it with her family. She annoyed me because she belittled my people for seeking my help. I sacrifice myself and share my salary with my people.

Regarding to “Plans za Kesho” as she quoted I have financed, managed and initiated various youth projects. I want the youth of this country to succeed; I want them to make a name for themselves because I understand how hard life can be and I have been there before. Is Caroline paying hospital bills, maternity fees, donating working tools, car wash machines, water tanks etc? Is this giving handouts? The role of the senator is beyond what i am doing on the ground for Kenyans. As a senator, my role is purely legislative but I try my best to go an extra mile to take leadership down to the common Mwanaichi.

Very serious allegations have been leveled against me and I’d like to tell Ms. Mutoko that I was cleared by the Court and if she has any evidence she is free to present it.
With that said, I will always stand by my people, I will help them out whenever I can and nobody is going to change that.

Robert Alai’s Take on Sonko’s Outburst on KISS 100 < Previous
Timeline of Events Before and After Sonko’s Melt Down on KISS 100 Next >
Recommended stories you may like: