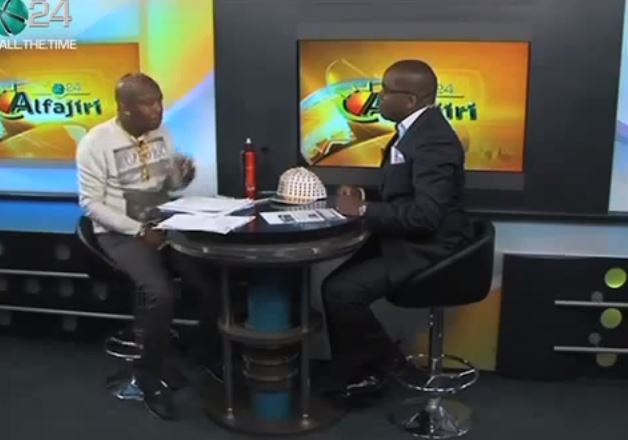 Ever wondered what a guest and a journalist discuss in studio when the camera is not rolling?
Last week, K24 made a blunder that has exposed just how cunning Nairobi Senator Mike Sonko can get, and how Jimmy Gathu easily plays ball.

Jimmy Gathu hosted Sonko on the morning show, K24 Alfajiri. As is the norm, the station uploaded the interview on YouTube.
However, they made the mistake of uploading the uncut version.. a mistake they soon realized and rectified.
Fortunately for us and unfortunately for them, someone downloaded the video before they deleted it, and returned it to YouTube.

As you will see on the video, Mike Sonko directs Jimmy Gathu on some of the questions to ask him. In fact, he tells Jimmy how to ask them.
At some point in the interview, as viewers are being showed a video of some news report, Sonko hands Jimmy Gathu a Nation Newspaper page with a story about him.
The controversial senator had apparently called cabinet secretary Eng. Kamau arrogant. He tells his host to ask him why he called the minister that. You may want to point your cursor to minute 7:10.

Funny enough, when the camera starts rolling, Sonko pretends he had not even seen that paper.
Jimmy Gathu plays ball and reads him a paragraph in the article, then Sonko ‘innocently’ asks, “Hii ni gazeti ya lini?”, as he extends his hand to have a closer look.

At minute 9:05, Sonko tells Jimmy Gathu to ask him about the PEACE message on his head. Sure enough, at minute 9:17, Jimmy Gathu asks about it, lying to us that he had been looking at Sonko’s hair all that time, even bursting into laughter.

Watch that video, with particular interest to the mentioned times.

Embarrassment For Sunderland As Reserve Team Defeats First Team In a Friendly Match < Previous
PHOTO – Lupita Nyong’o Chilling With Brad Pitt Next >
Recommended stories you may like: