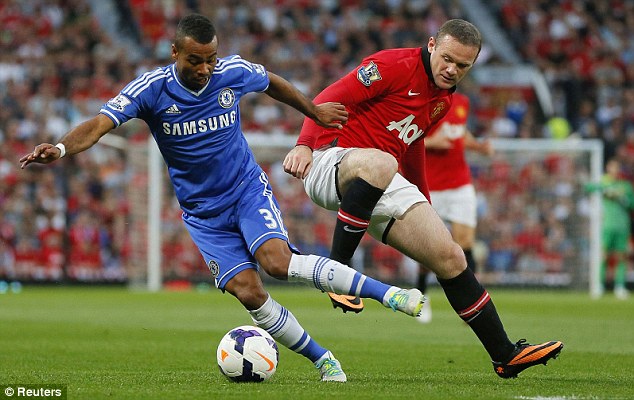 MANCHESTER, England, August 27 – Wayne Rooney may have played his way out of a transfer to Chelsea after a committed display in Manchester United’s 0-0 draw against their Premier League rivals on Monday.
Rooney has been the subject of two failed bids from Chelsea in recent weeks, but he was one of few impressive players on a night when the season’s first major head-to-head clash failed to live up to its billing.
The England striker’s performance, in which he tested visiting goalkeeper Petr Cech on three occasions, prompted Chelsea manager Jose Mourinho to admit that he could miss out on a move for the 27-year-old.
“I think probably now he thinks he wants to stay,” Mourinho told Sky Sports. “If that is his decision, we will respect that and say it is over.”
Rooney’s display, and Mourinho’s subsequent declaration, will have cheered David Moyes after his first home game as United manager, even though he saw his side refused a second-half penalty following an apparent handball by Frank Lampard.
“I thought we played very well, but couldn’t get the final cross in to get the final chance in front of goal,” Moyes said.
“I didn’t have a great view of the penalty claims, but I think it’s still a situation where the referees don’t know what is handball and what isn’t.”
Mourinho provided a provocative touchline presence and was goaded throughout on his return to Old Trafford as Chelsea coach, but his team rarely threatened ahead of Friday’s UEFA Super Cup against Bayern Munich.
“We play to win but if we don’t win, we don’t lose, and I think the players understand this completely,” Mourinho said.
“Both teams gave everything and I think towards the end, my players went for the defensive position and to get the point.”
The point was enough to send Chelsea top of the nascent standings, but they have played a game more than the rest and United can draw level with them if they win at Liverpool on Sunday.
Rooney’s inclusion in United’s starting XI, for the first time since April, caused the evening’s first ripple of excitement, but Mourinho’s team selection was every bit as eye-catching.
The Portuguese named a team without a recognised striker, deploying Andre Schuerrle up front ahead of Oscar, Eden Hazard and Kevin De Bruyne, and leaving Fernando Torres and Romelu Lukaku on the bench.
Moyes could not have picked a more high-profile opponent for his first turn in the Old Trafford dug-out, or a more glorious evening, but the fare on the newly laid pitch was disappointing.
Twice, Oscar shot straight at United goalkeeper David de Gea, while United’s best chance of the first half saw Robin van Persie deceive half the stadium into thinking a goal had been scored with a snapshot that ruffled the side-netting.
Rooney, for his part, looked determined to influence the game, despite Chelsea’s fans mischievously taking up their United counterparts’ chants of “Rooney!” and pledging: “We’ll see you next week!”
Playing in support of Van Persie, he constantly dropped deep to demand the ball, but when he managed to find space on the edge of the box with a smart turn, his shot lacked the power to trouble Cech.
Chelsea were content for their hosts to attack them, but the tactic almost back-fired in the 56th minute when Rooney found Danny Welbeck inside the box, only for the England forward to poke the ball wide.
In response, Gary Cahill tested De Gea’s handling with a meaty drive from distance, but Mourinho decided his team needed a greater cutting edge and sent on Torres for De Bruyne.
For all the enmity between the sides, the game lacked bite, but United appeared to have cause to feel aggrieved when referee Martin Atkinson failed to award a penalty after Tom Cleverley’s shot struck Lampard on the hand.
Rooney raised the biggest cheer of the night with a full-bodied sliding tackle to dispossess Ramires, before giving Cech his last and most searching examination of the night with a powerful drive from 30 yards.
-AFP
Follow @nairobiwire
HILARIOUS – Real Househelps of Kawangware (Video) < Previous
Beautiful Photos of Papa Shirandula’s Mama Nyagothie Next >
Recommended stories you may like: