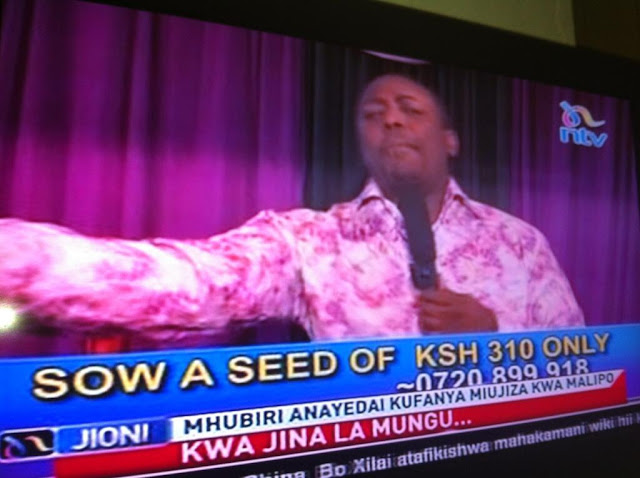 Last night, NTV carried a story on a rogue pastor who has been charging for prayers – Dr. Prophet Victor Kanyari of Salvation Healing Ministry Church.

In his televised services, Kanyari gives up to four prayer lines, where sick or needy persons can access him directly. When you narrate your situation to him, he judges your economic capability and charges you a certain amount accordingly.
NTV’s Enock Sikolia made two calls on the prayer line. In the first, he posed as a Mumias man desperate for a life partner. The prophet charges him Sh777 for his prayers, but Sikolia told him he couldn’t afford. At this point, the man of God hang up and blatantly refused to pray for him.

In the second call, Sikolia posed as a businessman whose container had been detained at the port. The prophet promised that the container would be released after a prayer fee of Sh7,777.

In Kanyari’s services, people claiming to have been healed after his prayers come forward, but just like in Mwende’s case, they may not be genuine.

Church Summons Eric Omondi Over ‘Jesus Turning Stone into Bread’ Joke < Previous
P-Unit’s Bon’Eye Ties The Knot Next >
Recommended stories you may like: