Meet Patrick Amunga.. The Genius Boy Who Has Moved From Class Two To Eight in Three Years 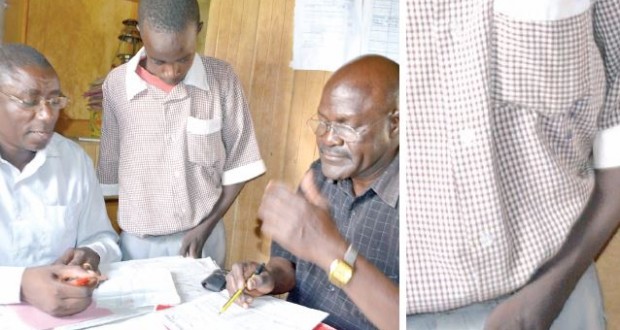 By BANTALEO MUHINDI
THE school, Manyole Primary, some kilometres from Nambale town is a typical rural primary school like thousands in Kenya. However, there is something extraordinary that has baffled teachers, fellow pupils and parents.


A pupil called Patrick Amunga has gone into annals of school’s record books as the first pupil to take the shortest time to progress from one class to another. Since he joined class two, he has advanced to standard seven where he is now within two years! According to the school’s head teacher, Peter Inganga, the pupil joined the school in Standard Two in the year 2011.This was however not the class in which he should be. “He belonged to a higher class,” Inganga discloses. “Due to his immense ability to grasp class work, the boy was promoted to the next classes within a short period of time until Standard Seven,” says a baffled head teacher. He continues while hugging the boy: “When Amunga joined Standard Two in 2011, he scored everything in examinations and we felt he was beyond that class. That’s why we promoted him to standard three after one week,” says the head teacher.


Again in Standard Three, he absorbed all that there was to be taught after only one term. We could not keep him with the rest so we promoted him to standard four where he also proved that he was beyond the contents of that class. Once more, we promoted him to Standard Five just after one term!” an excited Inganga says, adding that his school is lucky to have a genius. The reserved boy did not disappoint and his superbrain was again at work.

He studied class five work for only one term. Once more, the school management decided to do what now has become a custom as far as Amunga is concerned. We promoted him to standard six,” Inganga adds. The head teacher continues “Although he mastered much of academic contents in standard six, we forced him to learn the whole year in that class before he moved to Standard Seven. He was performing exemplarily. Scoring all marks.” Exuding confidence that the boy will score highly in his KCPE examinations, Inganga says the boy should actually be in class eight by now “Because in standard seven he answers all questions in examinations correctly and understands the content which normally is supposed to be beyond his brain grasp so effortlessly.”

In a district mock taken this term, the pupil clinched the eighth position though his teachers felt he should have performed better. His class teacher, Joseph Magero, describes him as humble, hardworking and intelligent. “The boy speaks impeccable English. He is reserved and thoroughly engaging teachers in academic discourses.” As if understanding that discipline is the hall mark of success, the boy goes out of his way to be in school almost all weekends discussing past examination papers and general revisions. The boy as expected, is always number one every term. He is a religious person and displays leadership qualities too and that’s why he was elected a class prefect this term by his class mates, his head teacher notes. Stayed in school for a term Normal child but with all the wizard brain and potential, Patrick Amuga is lame.
Born in 1995, like any other normal child, he joined nursery school at Matungu Primary School, Butere Mumias District  in 2000. He stayed in school for one term and was moved to class one. This, of course, was encouraging to Concepta Amuga Masiga, the boys mother. Least did she know what was in the offing for her and son. The following year, her promising son developed a rare disease which left him paralysed. For ten years, the boy battled for his dear life while his mother oscillated between her rural home and Kenyatta Hospital seeking treatment. She had been referred to other various medical centres in Western Province.His right side of his body was paralyzed and for ten years, he just slept at home without going to school.

With nostalgia, Mrs. Amuga recalls how he started ailing. It all began on May 23, 2001 when he came home complaining of a pain in the right leg, hand and ribs. She says that she did not hesitate to seek medical attention for the then toddler. Mrs. Amuga swung into action. She dashed him to St. Victor hospital, in Mumias municipality where he was operated on to remove boils. Unsuccessful operation However, the operation did not heal him. In excruciating pain, his mother took him to Kenyatta National Hospital which in turn referred him to Alupe hospital in Teso District “But even Alupe did not help, “Only church prayers healed this boy in 2010 which enabled him to rejoin school the following year.

He had stayed out of school for ten years,” his mother discloses. Since the boy was healed by faith, he was resolute that he should be a born again Christian. He resolved to walk in the way of the Lord. Mrs Amuga says of him, “we refer to him as pastor when he is at home as he preaches the word of God to us and goes to church every Sunday.” As if to clarify what she says about the son’s faith in God, she notes that the lad is a member of the praise and worship team at the local church.” She notes that the junior Amuga has much passion for engineering, “He can assemble parts of a radio till it works and even neighbours bring their radios to him to repair for a token,” she muses. According to the pupil, his dream is to join Maranda High School in Siaya County before proceeding to the university to pursue an engineering course.
A third born in a family of seven, the boy, clad in a weather beaten oversized and partly torn uniform is conscious of his parents peasanty background but his academic future looks bright. Because of his academic prowess, teachers allows him to learn without completing school fee. “He is like our son and in some cases teachers pay for him the fees and other times we ignore some charges,” says the head teacher.

Photo – How Tanzania Rolled Out The Red Carpet For Obama… Excesses? < Previous
Julie Gichuru Returns To Sunday Live Next >
Recommended stories you may like: