Infotrak’s Angela Ambitho Warns Uhuru That Kenya is on The Verge of a Revolution, Just Like Egypt’s 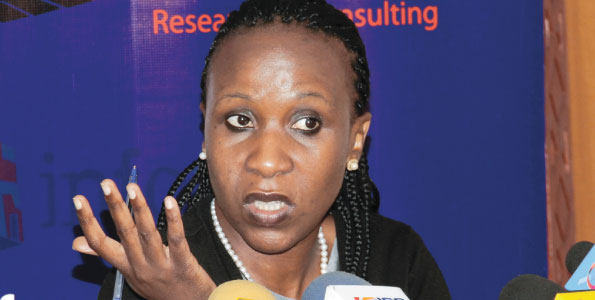 By Angela Ambitho
People from all social classes are discontented; they feel restless due social, political, religious or economic restrictions; Scholars are disillusioned; Government is unresponsive to societal demands and loses support; it’s near financial bankruptcy and resorts to over taxing. These are the classic symptoms of “revolutionary fever” according to late historian Crane Brinton.

He, among others, reviewed the French revolution where social inequalities was rampant, unfair taxation was eminent, political corruption and greed was dominant, inflation was the norm, lavish spending by the king was unrestrained and the rich got richer as the poor got poorer. But it was the bread riots that tipped the scales and catalysed the revolution. Food deprivation fuels trouble.

If we turn the clock forward to this past week‘s event in Egypt, the revolution fever symptoms relatively the same. During his short stint as President, Morsi failed deliver a renaissance. Some have quipped that “he was his own worst enemy, deaf and blind to the gathering storm that ultimately swept him away. Instead of delivering on his promises, such as more jobs and greater inclusiveness, he monopolised power and entrenched his cronies in state institutions”. His reign left Egyptians feeling no better than they had under the Mubarak’s reign. History advises that “an empty stomach isn’t a good political advisor”. Egypt now finds herself under military rule she so detested.

Of what use is history if we can’t bring it home?  Kenya’s past couple of weeks signify burgeoning discontentment. The teachers strike seems to have no end in sight, as the nurses threaten to follow suit .

Persistent supremacy battles between the upper and lower houses threaten the entrenchment of our new Bi-cameral parliament. Government expenditure is characterised by unnecessary largesse and misplaced priorities; from the cabinet secretaries acquiring guzzlers, to the governors budgeting for golden robes, kinglsy palaces and guzzling iron chariots; to MPs awarding themselves handsome pay, to the retired president being gifted with a send-package fit for a king; the rich and are getting richer as the wananchi get poorer.

Moreover, public positions continue to be filled by politically correct cronies making a mockery of the constitutional requisite for vetting of government jobs and to add insult to injury, the planned imposition of  VAT on essential commodities such as food only serves to make the hungry hungrier and angrier.  When summarised as I have done, our situation doesn’t look very enthusing does it?
Indeed as we delve into the unchartered territories of Kenya’s transition, our two honchos who seem quite keen in amassing public approval must be alive to the murmurs and shouts of discontentment. They must embrace history and it’s a vast early warning signal.