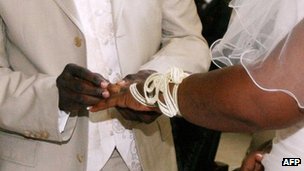 The legal age for marriage in Ghana should be raised from 18 to 23, chief government statistician Philomena Nyarko has said.

This would make women better prepared, physically and mentally to have children, she said.
It could also slow population growth in Ghana by 15% to 20%, Ms Nyarko added.
Her proposal comes as MPs in Nigeria are debating whether to scrap the 18-year age restriction for marriage so that people can wed earlier.
Some Muslim MPs argue that the restriction violates Islamic law, which allows marriage at the age of puberty.

Nigeria, Africa’s most populous country, is roughly divided between Muslims and Christians.
Ms Nyarko said that women who delayed marriage and pregnancy until the age of 23 would have healthier lives, she said.
“It is well known that health outcome for both mother and child improve, if pregnancy is delayed until when the young woman has matured for marriage and childbearing, to help save the lives of both mother and child,” Ms Nyarko said.
Most people in Ghana, which has a population of about 25.5 million, are Christian.

Kenyans Make Fun of Capiroo FM’s Accent… Hilarious < Previous
8 Signs That He Will Marry You Next >
Recommended stories you may like: