By Ken   /   Thursday, 02 May 2013 07:06AM   /   Leave a Comment
TNA national chairman and nominated MP Johnson Sakaja is demanding an apology from the Standard newspaper, after journalist Geoffrey Mosoku wrongly quoted him in a story about the Mps demand for Sh 7 million as car money.
Sakaja was reported to have said, ” If you think Sh7 million is too much, the alternative is to give us GK vehicles, drivers and you fuel and maintain the cars for five years and see how much it will cost.” 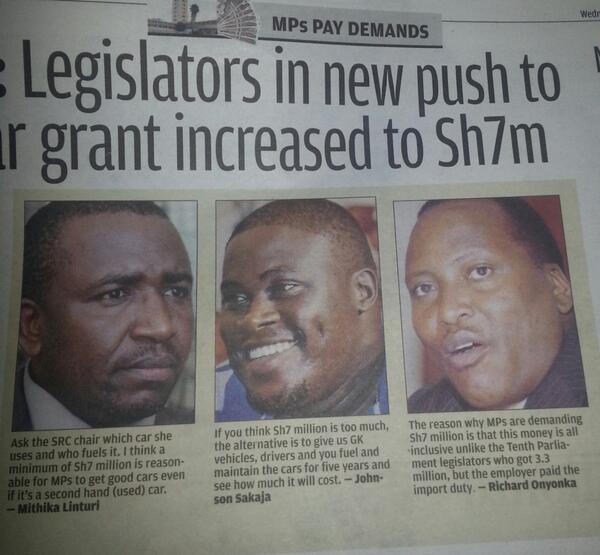 The youthful law maker then released the following statement demanding for a retraction of the statement, and an apology from the media house.

STATEMENT BY HON. SAKAJA JOHNSON
My attention has been drawn to a story in the Standard 1.5.2013. where I have been wrongly quoted by one Geoffrey Mosoku weighing in on the 7Million Shilling grant for vehicles as demanded by Members of Parliament.

I would like to state categorically that I have not made such a comment to the said journalist. It is not in my character to speak in such a high handed manner and I would not express myself in such a condescending tone.

I strongly believe in servant leadership and that is the kind of leadership I have pursued and portrayed both as the Chairman of The National Alliance and as a Member of Parliament. I am on record even in my maiden speech urging my colleagues in the house to remember that Leadership comes from God and is an exercise of stewardship over his people and resources. The positions we hold are held in trust for the people and are meant to serve the people, not ourselves.

I demand a retraction and apology on the said story.

Sakaja also took to twitter to clarify to his fans.

@hotsecretz @macotani yani, that doesn’t even remotely sound like me. I would not make such a high handed statement…
— Sakaja Johnson (@SakajaJohnson) May 1, 2013

@akenyangirl @macotani I would never make such a high handed statement. I personally don’t need the grant as I have no constituency.
— Sakaja Johnson (@SakajaJohnson) May 1, 2013

@frankmwenja I did not say that. That is the product of Mosoku’s fertile imagination. I am doing a statement to that effect.
— Sakaja Johnson (@SakajaJohnson) May 1, 2013

I have not made such a comment as published in the Standard and it isn’t in my character to speak in such a high handed manner.
— Sakaja Johnson (@SakajaJohnson) May 1, 2013

UPDATE: Standard newspaper has issued an apology in today’s (2nd May) issue. 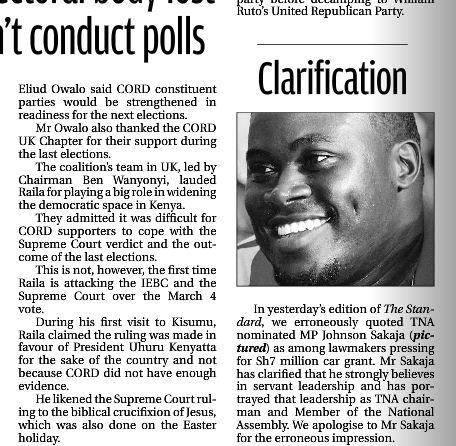 What Kenyans Think About The Mombasa ‘Cat Trapped in a Jerrycan’ Incident < Previous
Jose Mourinho Gives Barcelona A Mocking Seven Finger Salute Next >
Recommended stories you may like: