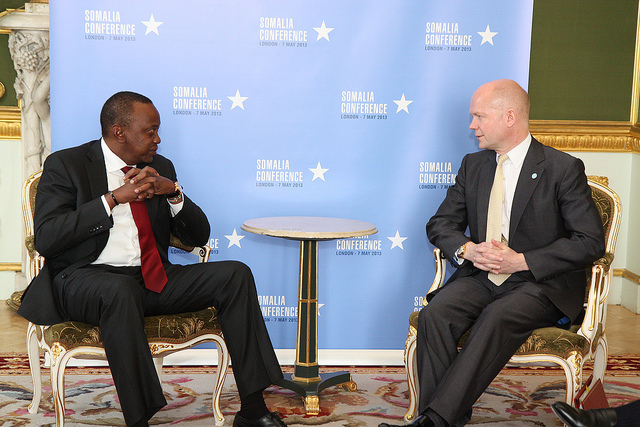 The London Evening Post is reporting that Kenya’s president Uhuru Kenyatta and his Ugandan counterpart Yoweri Museveni, were subjected to humiliation during the Conference on Somalia held this week at Lancaster House in London.
Before the trip, it was reported that President Uhuru will attend the conference, then meet PM Cameron.
Apparently, Britain Prime Minister David Cameron avoided been photographed with the two presidents from East Africa, but was not shy to be seen with Somali president Hassan Sheikh Mohamud.
It is also curious that all Kenyan media houses carried the story of Uhuru meeting Cameron, but none provided pictures. Normally, any form of meeting between two presidents is accompanied by pictures, but this was not the case.
The London paper is reporting that government officials in Britain went out of their way to make sure Mr. Kenyatta was not photographed with them. Only Foreign Secretary William Hague was apparently allowed to be seen with a ‘war criminal’, as their media fondly calls President Uhuru. That picture with Hague is the one that was circulated to media houses, and appeared in today’s papers.
London Evening Post notes that President Uhuru was jovial the whole time, despite the clear humiliation. The same can however not be said of Museveni.
“While President Kenyatta was largely ignored by his British hosts, he did not show any ill-feelings and was seen throughout the day in what one can describe as a jovial mood. On the other hand, the Ugandan leader who has been in power since 1986, showed obvious signs that his long stay in power may be taking its toll. He looked tired and uninterested in whatever was going on around him.” it writes.
When it emerged that Uhuru had been invited to London, British papers reported how it would cause an embarrassment to the government, if he is found guilty by the International Criminal Court. Some suggested that photos of Cameron shaking hands with a ‘criminal’ could be used to finish him politically.
It seems he found a way of avoiding such a scenario, but the big question is, why did they invite President Uhuru in the first place?
© nairobiwire.com
Follow @nairobiwire
Jose Chameleone Wears Sh 1 Million Space Suit During Concert And Nearly Suffocates < Previous
Bishop Mark Kariuki Wedding Photos Next >
Recommended stories you may like: