By Ken   /   Monday, 06 May 2013 10:20AM   /   Leave a Comment
Mutula Kilonzo was clearly a millionaire, probably a billionaire, but his family is holding a fundraiser this evening at the All Saints Cathedral.
Yesterday, Sunday Nation ran a story on Mutula Kilonzo’s wealth. Besides the thousands of acres in his name, the late senator has several property and a successful law firm. Reportedly, the senator’s salary for the past 10 years was collected by KRA, to pay up tax dues in the region of Sh 300 to Sh 800 million.

Guided by that, and the fact that the purpose of the fundraiser has not been stated, some people are speculating that it’s to help clear KRA’s arrears.

Below is the obituary published by Sunday’s newspapers. Fundraising part is in bold. 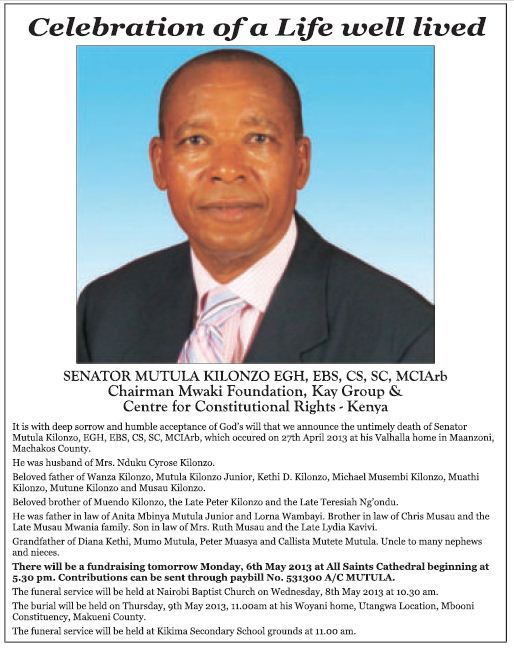 Below are some views from a few Kenyans.

@MuthuriKinyamu If Mutula spent 700K to feed 3 lions a month, 200K for a weekend at his Maanzoni home then why the burial fundraiser?

@makodingo Why is there a fundraiser complete with an MPESA playbill number for Mutula’s funeral??

@ItsLynnie OK, not to be crass or anything but tbh, I don’t understand why Mutula’s family is having a fundraiser to offset his funeral expenses.

@walalr Wtf is Mutula Kilonzo’s fam holding a fundraiser for?!” For a guy who spent 200k every weekend?!!

Viagra Theory Collapses After Heart Attack is Ruled Out in Mutula Kilonzo’s Death < Previous
Kenyans Plan To OCCUPY PARLIAMENT – 14th May 2013 Next >
Recommended stories you may like: