Meet Moses Muhia: The Man Who Beat Uhuru in ’97 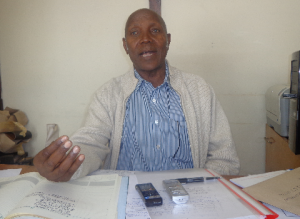 Moses Muihia has in various forms been described as the unknown political dwarf who miraculously defeated Uhuru Kenyatta when the latter first attempted his hand at national politics by contesting the Gatundu parliamentary seat in 1997.
But many do not know that by the time he faced President Kenyatta in 1997, Muihia, who is a practising quantity surveyor, was an accomplished politician who first contested the Gatundu parliamentary seat in 1988.

In his mid-20s then, Uhuru was yet to think of matters politics, but the former Gatundu South MP had gained political experience by campaigning for others in Gatundu and elsewhere since 1979.
“I campaigned for the late Mathare MP Andrew Ngumba in 1979, but I was thrilled by the election of the then youthful Ngengi Muigai overwhelmingly as the MP for Gatundu in that year’s general election.
“At that time, Ngengi was a young man like me and I was hopeful that he would involve the youth in identifying and solving the problems that afflicted the constituency. Unfortunately the MP did not have time for us, which disappointed and drove me to campaign for his opponent Zakaria Gakunju in the 1983 general election.”

Like many Kenyan politicians, Muihia was later “dragged” into politics by his friends and colleagues who in 1988 insisted he head one of the mlolongos that would create an MP without the ‘inconveniences’ of the secret ballot.
“I was part of the infamous mlolongo election that year competing against Ngengi and Gakunju, but I did not go beyond the nomination stage as there was a proviso by the Moi government that if one garnered 70 per cent of the votes at that stage, you stood elected automatically.”
This was the regime’s way of rigging out people who had ran out of favour with the government and the provincial administration had a field day declaring the longer queues shorter and thus ‘appointing’ the loser the winner.

“Since the regime did not want Ngengi, Gakunju was declared the winner with over 70 per cent of the mlolongo votes so there was no way I could face him at the secret ballot stage.”
In 1992, Muihia was being wooed by Kanu to contest the same seat it had blessed for Gakunju in the previous election, but he declined as he was already an opposition agitator.
“To disable me, the government refused to pay me some Sh7 million which I had worked for as a consultant. This is the money I wanted to use for the campaign and without it I was not able to again go beyond the nomination stage.”

The former MP claims the seat would have easily gone to him “as I had done quite a bit of work in Gatundu” and that is why in 1997 he was elected overwhelmingly, the fact that he was competing against the son of the founding father and first MP of Gatundu notwithstanding.
“Having been in politics all those years, I knew that Uhuru was not ready for national politics and I also knew that he and Ngengi were fierce opponents, an element I took advantage of.
“At the same time I campaigned quietly but intensely, something the two were oblivious of and then when Ngengi realised he was losing, he opted to support me instead of his cousin. He asked his supporters to vote for me and so with his and my supporters, I easily beat an ill prepared Uhuru with a landslide majority.” Muihia got 22,000 votes against Uhuru’s 10,000.

Uhuru was subsequently nominated to Parliament and talking to Muihia last week, the Star wondered whether the two ever came together to discuss Gatundu’s development matters.
“Of course our paths crossed in Parliament and the more I saw of him, the more I realised he would one day become the Gatundu South MP and as such wanted to talk to him on matters concerning the constituency. In fact one night we had a long social session, talked generally but the future President did not show much of his hand.”

Those who have come close to the man will confirm that despite his warm demeanour, President Uhuru does not let out much and will humour you but will rarely take you to the bosom, at most remaining non-committal.
Muihia told the Star that he was approached several times by other politicians claiming to have been sent by former President Moi to persuade him to step down for Uhuru. “They told me Moi could pay any price for this, but I always told them to tell the former President to approach me personally which he never did.”

But in November 2002, Moi was “brought to Gatundu” by the late Njenga Karume and for the first time the former President openly expressed his opposition to Muihia.
“Campaigning for Uhuru in Gatundu, Moi told the people that he had been given the mantle of leadership by the late President Jomo Kenyatta and had promised him that he would return the favour.
“He would then ask the people whether or not they were interested in getting back the presidency, an enticement they could not resist. I continued campaigning but I could not withstand the combined weight of political giants that included the President.”
Muihia, however, describes Moi as a likeable person and a good political consultant. “He is also very generous and those who visited him always came out with something ‘to buy goodies for their families’, as he put it. Moi is a humane person and even if he does not like you, he will still talk with you.”

This is the opposite of the immediate former President Kibaki, who only keeps “essential contacts” for his convenience. “When Uhuru was his opponent in 2002, I was one of his right hand men in Gatundu and he actually received 5,000 votes from Gatundu. In fact at the time when he was celebrating his victory at Muthaiga, I was standing right behind him.”
But that was the last time Muihia would come close to or hear from Kibaki. “If you do not belong to the Kibaki inner circle at a given time, you are out of his mind.”
The constituency development fund had not been mooted in the eighth Parliament, so unlike the current bunch, MPs had to use their pay to solve many of the social problems of their constituents. “We started off with a salary of Sh79,000 which gradually rose to around Sh120,000 and towards the end we were receiving Sh395,000.

“Without CDF, the money we received would be used in harambee for hospital bills, educational bursaries, building of classrooms and anything else in-between. By the end of the month, I would be eagerly waiting for my pay like anybody else.”
Of the ongoing clamour for bigger pay by the current crop of MPs, Muihia says, “There is no amount of money you will give an MP that will satisfy him/her.
MPs are looking for money to sustain themselves and keep enough aside for the next election campaign. But given their current responsibilities, Sh500,000 is more than enough for MPs.”
During his tenure, insecurity which is slowly creeping back to the constituency was at its highest in Gatundu and Muihia remembers constantly fire fighting to keep it down, saying he won some and lost some.

“However our main occupation as MPs in the eigth parliament was to change laws to make the country more democratic which limited our concentration on constituency issues.”
Muihia says President Uhuru has now come of age and given his exposure and their combined energy together with Deputy President William Ruto, he sees a team that will lead Kenya towards achieving Vision 2030. “I support his presidency and wish him well.”
After a six-year stint at the ministry of Public Works, Muihia taught quantity surveying and building economics at the University of Nairobi for eight years from 1979. Later he ventured into private practice through his company, Continental Quantity Surveyors.

Currently Muihia is a director at the National Construction Authority Board, a “product of the Kenya Federation of Master Builders”, an organisation made up of small and medium local construction companies. He became the national chairman of KFMB, which was founded in 1995, in March 2012.
He joined the master builders in 2004 to lobby government on issues affecting local contractors and in 2006 he drafted a bill on behalf of the organisation to be taken to Parliament to enact a law that would create the construction authority. Muihia then forwarded the draft bill to the ministry of Public Works who then made amendments and placed it on the floor of Parliament.
“However it was not until December 2011 after much lobbying with members of Parliament and government officials that the bill became law. The authority was subsequently formed in May 2012 and board inaugurated the following month.” The board is comprised mostly of private sector players in the construction industry.

As an official of KFMB, Muihia laments that a reservation clause in the Public Procurement Authority Act, that should ensure a certain percentage of public construction works goes to local small and medium contractors is being deliberately ignored.
“However during the Kibaki era, we had created quite a bit of rapport with the various public stakeholders and we hope the new government will seriously adhere to the reservation clause in the Procurement Act. To achieve Vision 2030, we must build the capacity of local contractors.”
He admits that many contractors especially the locals have been doing shoddy jobs but attributes this to the hitherto lack of regulation and proper specifications by professionals.
“The industry has been running without regulation and those on whom this regulation and registration was vested in colluded with the contractors to do these shoddy jobs, but now we have taken over. All contractors now have to be registered by the National Construction Authority.”