Horror As Robbers Attempt To Break Into To Mutula Kilonzo’s Grave To Steal His 0.5 Million Casket 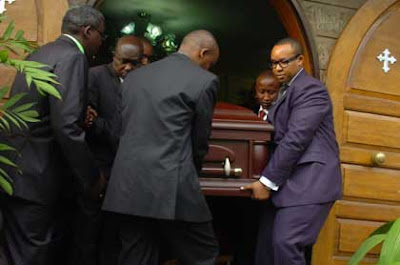 Police have been deployed to the rural home of the late Makueni Senator Mutula Kilonzo, in Mbooni, after attempts by thugs to break into his grave, with an intention to steal his casket.

Mbooni East OCPD James Baraza confirmed they had received information that some people had planned to steal the casket containing the remains of the late Mutula.

The incident is said to have taken place on Friday night, but the suspects were unsuccessful after employees and neighbours raised the alarm, forcing them to flee. The OCPD confirmed that investigations have been launched.
“We received intelligence reports that there were some people planning to raid the Woyani home of the late Mutula and moved with speed to tackle the matter,” he said.

According to Baraza, no one was found at the scene, prompting the indefinite deployment of officers. When the media visited the place on Saturday and Sunday, there was tight security at the home and its environs.
Mutula Kilonzo’s casket is said to the worth anywhere in the region of half a million shillings, explaining why it is a target.

The late senator died on April 27th at his Kwa Kyelu ranch in Maanzoni, Machakos County. The cause of death still remains a mystery.