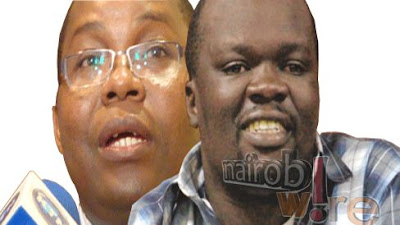 The National Cohesion and Integration Commission chairman Mzalendo Kibunjia is in the spotlight, after blogger Robert Alai released a telephone conversation he had with him, without the former’s knowledge that he was being recorded.

The 11 minute recording starts as just a typical phone call, for about 6 minutes, where the two discuss general things, such as the hate speech on social media and the excessive celebrations by Uhuru Kenyatta’s supporters after he was announced winner.
At around the 7the minute, the conversation takes a wrong turn.

Robert Alai tells the NCIC chairman that Luos were ready to accept the results , until it “emerged that there was rigging.” He said that he, and basically majority of Kenyans were ready to have another Kikuyu president as long as he was elected with the required numbers.

At this point, Kibunjia interrupted and said that the election was not rigged ‘according to his sources’. He attributed Uhuru’s win to his stronghold’s registration numbers. He said that even the sick were pulled out of hospital to go and register as voters.

On the part of no rigging, Alai was not in agreement, citing one instance where IEBC chairman Isaack Hassan said that there was a computer programming error that factored rejected votes by 8. The blogger read mischief saying it is very unlikely for such an error to occur in a properly coded program.

Mzalendo was not done yet. He further revealed that there were attempts by both CORD and Jubilee to hack into the IEBC system. He did not divulge much, but said that was the main reason why the whole electronic tallying system was abandoned.

In conclusion, Alai told Kibunjia of one Benson Wandimi*, who allegedly wrote on social media, “You uncircumcised baboons, we will take you to where you belong, ” in reference to the Luo community. This statement made Kibunjia to laugh uncontrollably, but the controversial blogger was not amused. He told him, “Its not something a cohesion leader should laugh about.”

Harambee Stars Mistreated in Nigeria – Photos < Previous
Ruto Mistakes Uhuru’s Piece of Land For one of his Strongholds.. and other funny pictures this week Next >
Recommended stories you may like: