By Ken   /   Wednesday, 20 Mar 2013 09:02PM   /   Leave a Comment
Harambee stars are in Nigeria for a World Cup qualifier match against African Champions, Super Eagles.
The Kenyan national team has however not been given proper reception by the Nigerian FA, as is common practice worldwide. In fact, they have been mistreated.

On arrival at Lagos, Harambee Stars were supposed to be flown to Calabar, the town where the Saturday match is to be played. This was not the case, and the players and the technical staff was stranded in Lagos for hours. Eventually, they had to spend the night in Lagos, in a hotel similar to those found along Nairobi’s River Road.
Kenya football body FKF has officially complained to the Nigerians.
In the letter dated 20th of March 2013, FKF Secretary General Michael Esakwa told the Nigerian FA, “As per your earlier Correspondence and Commitment our national team was to be flown to Calabar upon arrival, but this has not been done yet,” He said, “The Kenya National Team is still held up in Lagos and booked in a substandard hotel and Without a training ground.”

Harambee Stars also had to conduct their training inside a primary school in Lagos. 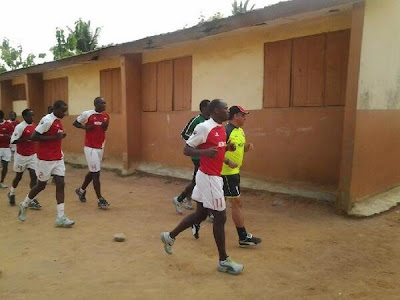