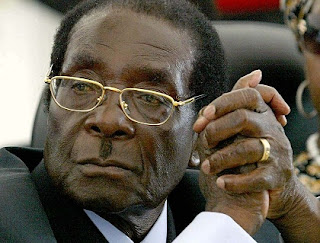 Zimbabwe’s President Robert Mugabe will attend this week’s inauguration mass for Pope Francis, a presidential official said, with the staunchly Catholic leader set to leave for Rome on Sunday.
“Yes he is attending,” the official told AFP, adding that the veteran leader’s trip will not be affected by the European Union travel ban because “the Vatican is a state on its own”.
Mugabe, who has been widely condemned for human rights abuses, visited the Vatican in May 2011 for the beatification of the late pope John Paul II.
In 2005, he had attended John Paul II’s funeral on a visit that drew controversy after Britain’s Prince Charles shook hands with him.

The 89-year-old Mugabe has been barred from travelling to the European Union for more than a decade because of concerns about vote rigging and rights abuses.
The Vatican is a sovereign city-state that is not part of the European Union, although to attend the ceremony Mugabe would have to transit through Rome.
Travelling under UN auspices, Mugabe also went to Rome in 2008 for a summit of the UN Food and Agriculture Organisation.
He is flew out on Sunday, a day after Zimbabwe held a referendum on the constitution that saw aides of his rival and coalition government partner Prime Minister Morgan Tsvangirai arrested.
The new constitution, which is expected to be adopted, would dramatically trim Mugabe’s powers and limits presidential terms.
Global Post