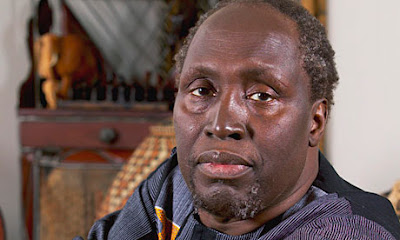 I MUST have been about 10 in colonial Kenya when I saw men, women and children in a convoy of lorries being forcibly removed from their land and relocated to some dry plains they called the land of black rocks. They sang a sorrowful melody, but one that described their love and solidarity in hardship: even when they picked a morsel from the ground, they split it among themselves. It was an image that captured vividly the ideals of mutual care and collective hope in the Kenyan anticolonial resistance. In my first trip to Europe, in 1965, virtually the entire village saw me off at the airport. They said: You must return home.

But much of my career has been spent in exile. My novel “Devil on the Cross” was scrawled in my mother tongue, Gikuyu, on toilet paper from a maximum-security prison in 1978. That was the last novel I wrote there.
Last week’s election in Kenya compels me to point out something little noticed in the West. The real winner was a man who wasn’t on the ballot: Daniel arap Moi, the country’s leader from 1978 to 2002, who terrorized it for 24 years and destroyed all credible institutions, including political parties.
The election at first seemed to augur well for democracy. Turnout was an enthusiastic 86 percent and, despite some glitches, election observers gave the vote a clean bill of health. The president-elect, Uhuru Kenyatta, and his running mate, William Ruto, won with just over 50 percent of the popular vote. Their main opponent, Raila Odinga, has refused to concede — but took his dispute to the courts rather than to the streets, where months of deadly violence erupted after the last election, in 2007.
Although the process seems to have gone relatively well, it was Mr. Moi who spawned the winners. The sycophancy and corruption of his era are still ingrained in the political culture and are embodied by the rise of his allies in this election.
Mr. Moi was the vice president and hand-chosen successor of Jomo Kenyatta, Kenya’s founding father. Kenyatta introduced de facto one-party rule; Mr. Moi made it a full-fledged dictatorship.
When multiparty politics were introduced in 1992 — a phenomenon Mr. Moi hadn’t encountered — he turned to a young upstart, William Ruto, to cling to power. Mr. Ruto distinguished himself as a lieutenant for Youth for Kanu ’92, which conducted a campaign of violence and intimidation in the Rift Valley Province, home to Mr. Moi. Thousands of residents were forced to flee. Some returned, only to have to flee again around the next election, in 1997. The Rift Valley was also the epicenter of the 2007 violence, which displaced hundreds of thousands of people. In almost all the election cycles, the incitement to violence has come from members of the political class — not the Kenyans trying to simply lead their lives.
Before term limits forced Mr. Moi from office in 2002, he tried to position Uhuru Kenyatta, a son of Jomo, as his successor. Instead, voters chose an opposition leader, Mwai Kibaki. His decade-long tenure was tainted by allegations of police abuses, though he also tried to restore institutions wrecked by Mr. Moi. (The two had been allies, but had a falling out.)
Uhuru Kenyatta’s victory is due in part to his running mate, Mr. Ruto — an odd alliance given that their factions were on opposing sides in the 2007 violence. A consummate chameleon, Mr. Ruto joined forces, in succession, with Mr. Moi, Mr. Odinga and Mr. Kibaki. He was this election’s kingmaker, happy to be wooed by both leading candidates.
Mr. Kenyatta and Mr. Ruto share more than political expedience: they both face charges of crimes against humanity before the International Criminal Court for their alleged roles in the 2007 clashes. They have pleaded innocence, but they also deftly exploited the charges during the campaign, presenting themselves as victims of imperialist interference. Mr. Ruto faces another legal battle over allegations that he stole land from someone who fled the violence.
Against the backdrop of political intrigue, Kenya struggles against exploitative practices by Western corporations. A self-isolated middle class cruises in luxury above a sea of poverty. Nairobi’s skyscrapers and opulent hotels dazzle the foreign observer’s eye, while blinding it to the shacks, broken roads and unfinished World Bank projects.
Will Mr. Kenyatta and Mr. Ruto, two of Kenya’s wealthiest men, revive the economy, reduce poverty and corruption, resettle displaced persons and prioritize the interests of ordinary Kenyans? I am skeptical.
Kenya has never enjoyed a truly democratic culture. A new Constitution adopted in 2010 tries to decentralize powers and set up checks and balances. It offers a chance to roll back the entrenchment of the Moi legacy. Only then, finally, might the nation silence a motto Mr. Moi once embraced, without a trace of irony: “L’état, c’est Moi.”
Ngugi wa Thiong’o, a professor of English and comparative literature at the University of California, Irvine, is the author, most recently, of the memoir “In the House of the Interpreter.”

Dennis Itumbi Under Investigation For Allegedly Spreading Hate Speech on Facebook < Previous
K24 Poaches Kubamba Krew From Citizen TV Next >
Recommended stories you may like: