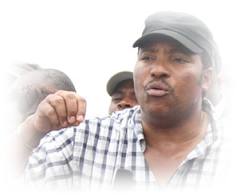 In a recent meet the people tour in Donholm, Nairobi governor aspirant Ferdinand Waititu was caught on camera dishing out money to some youths.
The TNA candidate started by giving a very short but articulate speech on what he would do for the people of Nairobi. He said he would make sure everyone had a job, and that no one would be sleeping hungry. He also promised to make funds available to the women and youth, before concluding by urging his audience to stop drinking cheap liquor.

Baba Yao however spoiled the otherwise good speech by appearing to bribe part of the audience, when he left a bundle of notes with one of them, with instructions that he shares with the rest. This meeting was not covered by the media, and this amateur video appears to have been taken by a member of the audience.

Man Behind ‘ Ni Kama Ndrama, Ni Kama Vindeo’ Slogan May Be The Next Bonoko, as He’s Featured on Radio < Previous
Keeping Up With Jeff Koinange: A Look At His New Sh 80 Million Job Next >
Recommended stories you may like: