Uhuru Set To Overtake Raila in Opinion Polls, After Reducing Gap To 1% 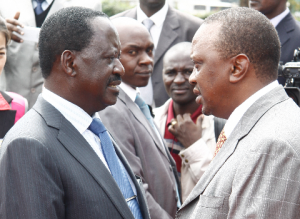 The race for the presidency is becoming tighter and tighter as the weeks progress. Opinion polls released yesterday by three pollsters commissioned by Citizen TV, show that the race is now too close to call, with Raila and Uhuru basically tied.

The companies involved in the research released on Monday Special are: Strategic Research, Ipsos Synovate and Infotrak Harris.

Going by the trend for the past few weeks, Uhuru Kenyatta may finally overtake Raila as early as this week, or at most next week. Previous polls have showed the gap between him and Raila at over 5 points, before getting to 3 in recent weeks, to this week’s 1. Should the trend remain constant, Uhuru should overtake Raila in the next few days..

According to Strategic Research, the popularity of CORD stands at 44%, Jubilee 43%, Amani 6% and Eagle 3%.
The pollster survey indicates that if elections were held today, CORD’s candidate Raila Odinga would get 44%, Jubilee’s Uhuru Kenyatta 43%, Musalia Mudavadi 6% while Peter Kenneth 3.

Ipsos Synovate on the other hand found the popularity of CORD and Jubilee tied at 44%, with Amani coming a distant third with 5% and Eagle at 2%.

Just like Ipsos, Infotrak Harris finds the popularity of Jubilee and CORD tied, though at 45%. On the presidential race however, Raila would garner 46%, Uhuru Kenyatta 44%, Musalia Mudavadi 6% and Peter Kenneth 2%.

Strategic Research and Ipsos Synovate interviewed 2,500 respondents in 33 counties spread all over the country while Infotrak Harris interviewed 2,646 respondents in 29 counties.
All the polls were conducted on the same period with Strategic Research doing it between the dates February 14th-17th 2013.
Ipsos Synovate held its poll between February 13th-15th 2013 while the third pollster Infotrak Harris polled between February 15th-17th 2013.

Open Letter To Churchill For Giving Us A Boring Show on Sunday < Previous
Season Finale of Faiba TV Commercial is Out. (Video) Next >
Recommended stories you may like: