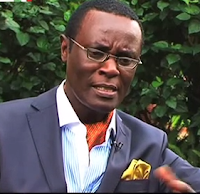 The country’s favourite political analyst Mutahi Ngunyi was among the thousands commenting on last night’s presidential debate, but for obvious reasons, his voice was loudest.

So who does he think won the debate? He has no clear choice, but he knows who did not win it. According to him, Martha Karua, Paul Muite and Ole Kiyiapi scored no points. The rest he believes were impressive.
This was his tweet.

On debate, Raila is seasoned; Kenneth is brilliant; UK is constant; Dida is evangelical; Musalia came alive; others are zero. I have hope!!
— Mutahi Ngunyi (@MutahiNgunyi) February 25, 2013

The political analyst was however impressed with Prime Minister Raila Odinga, especially after he defended Uhuru from attacks over land. Raila had said that Uhuru is just an innocent inheritor of his father’s land, and therefore should not be under constant attacks.
This was what Mutahi thought of this unexpected gesture by the PM.

Best debate EVER. Raila won my heart. His defense of Uhuru on land reminds me of the Raila I supported. Now the BOYS are separated from MEN
— Mutahi Ngunyi (@MutahiNgunyi) February 25, 2013

More Characteristics of a Nairobi Chic < Previous
Former ECK Chairman Samuel Kivuitu is Dead Next >
Recommended stories you may like: