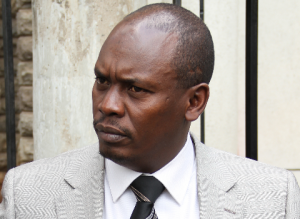 Citizen TV’s Julie Gichuru last night hosted the two front runners for the Kiambu gubernatorial seat, William Kabogo and James Nyoro. Kabogo is vying on a TNA ticket while Nyoro is in NARC.
The short debate/interview proceeded well, with Julie bringing Kabogo to task over his massive wealth. She asked how the former Juja legislator had acquired it, and Kabogo had ready answers. He said that he was in the importation business, which brought in a lot of money. According to him, he would import 100 cars every month, with each bringing in a profit of Sh 200,000. That he says translated to a monthly profit of Sh 20 million, a lot of money by any standard, and that’s how he bought his chopper.

The two also discussed party politics, where Nyoro accused TNA of lacking democracy. Kabogo then asked Nyoro whether GNU also lacked democracy, to which the latter did not respond. (Nyoro had initially defected to GNU before settling at NARC). Kabogo then took Nyoro to task on why he had elected a billboard along Muthaiga Roundabout, showing him with two party symbols, NARC and TNA.
Julie however stopped that line of questioning as the matter is still in court.

Then it came to Nyoro’s Dr. prefix. Apparently, the Narc candidate has been using the coveted prefix, without having actual papers. Kabogo wondered why his competitor would claim to be what he isn’t, to the extent of using the prefix on a gubernatorial debate on NTV some time back. Nyoro defended himself by saying it was people close to him who gave it to him, but it was really not a big deal as he will be getting his doctorate papers this coming May.

Julie then asked the two to ask each other one final question, Nyoro went first. He told Kabogo to reassure the people of Kiambu that he will conduct his campaign peacefully, to which Kabogo did. However, it was Kabogo’s question that caught everyone off guard.
He asked the Rockefeller Foundation managing director to state whether he is Illuminati as is believed of the Rockefeller family. He also told him to confirm whether he at one time fell and went unconscious as he was been prayed for by a pastor.

Nyoro was visibly furious with those questions, but composed himself in time to give a credible defense. He said that he is in no way a devil worshiper, leave alone Illuminati. He added that he has been a born again christian for 18 years, and was once a deacon at the Nairobi Pentecostal Church. His greatest witness is Pastor David Oginde of NPC.
On the Illuminati, he argued that the fact that the Rockefeller family is in the cult, does not mean all its employees are too. In his own words, Nyoro asked ” Are people working in the mortuary dead?”
© nairobiwire.com

Here’s An Old Photo of Bishop Margaret Wanjiru.. Very old photo < Previous
Americans Read Kenyan Tweets In Swahili.. Funny.. A Reply To Jimmy Kimmel Next >
Recommended stories you may like: