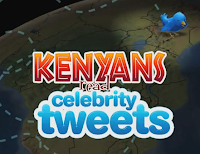 American comedian Jimmy Kimmel last week rattled Kenyans, when he had some few of them read tweets by American celebrities in a segment of his show that he called ‘Kenyans Read Celebrity Tweets”. The reasons some Kenyans got angry however, was Kimmel’s suggestion that there is no Twitter or internet in Kenya.
As a rejoinder to that video, Leo Faya, formerly of Capital FM but now in the US went to the street and did the reverse. He got Americans to read Kenyan celebrities’ tweets. And it’s actually very funny how they read Swahili.
Below are the two videos.

Kabogo Asks His Competitor Nyoro If He is Illuminati on Citizen TV < Previous
Al Jazeera Wrote That Both Raila And Uhuru Are on Trial At The ICC Next >
Recommended stories you may like: