How Kenyans Reacted After Uhuru Admitted Owning 30,000 Acres in Taveta 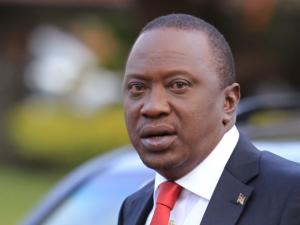 Uhuru Kenyatta was last night confronted with the land question his opponents have been singing about. The moderator Joe Ageyo, tried to introduce the subject by questioning Peter Kenneth on what he meant when he said his opponents had grabbed land. Despite Ageyo’s pressing, The ‘Tunawesmake’ presidential candidate could not find the strength to mention names.

Unlike PK, Iron lady, Martha Karua was ‘man’ enough to mention Uhuru Kenyatta by name, saying his family owned large chunks of land around the country, and this marked the beginning of the land debate.
Uhuru Kenyatta defended himself saying he has never been implicated in any land scandal and neither has any member of his family.
When asked how much land his family owns, Uhuru Kenyatta refused to answer that, instead beating around the bush. He would however admit that his family owns 30,000 acres in Taita Taveta, 4000 of which they recently donated.

That admission was the subject of hundreds of jokes and below are some of them.

Uhuru is allowed to beat around the bush,he owns the bush

Apparently Uhuru owns so much land he is everyone’s neighbour

Ati the only land on Uhuru’s mind is landslide victory on Monday.

Uhuru even owns that land in Land Rover and Land Cruiser.

Please dont take Uhuru to the Hague…he’ll steal all the LAND and leave it as The Nether….s”

Even the land that Moses was told by God to remove his shoes cz he was stepping on holy land is Uhuru’s.”

Uduak: uhuru kenyatta is it true that you own that land between a rock and a hard place?”

Uhuru owns so much land, when you land in trouble you are on his property

Joe Ageyo: How much land do you own? Uhuru: First and foremost, you are standing on my land!

Uhuru probably has warning signs on his land saying “Beware, land mine!”

Even if Uhuru sells his Taita Taveta land at Kshs 1 per acre, its still expensive than the 22k champagne

Susan Tujuane from #SouthC should help Uhuru in fencing all that land .. Damn you people

Everytime pilots ask for permision to Land, guess who’s at the end of the line? Yap U guessed Uhuru

Uduak: Uhuru, Whats your comment about Land? Uhuru: To be honest, HomeLAND is an awesome series.” Haha…lol.

Tukiimba anthem..bless this our LAND and nation.. chances are ni hio ya uhuru

Can u stop this Talk of #Uhuru and Land………4 christ sake the guy is called #Kenya_tta he is the landlord period.

Mwalimu Dida has arrived in a chooper. The C is silent.

Apparently Dida is being hugged and kissed by all his 17 wives. One at a time. This will take all night

Uhuru And Raila Have Been Laughing Together For Many Years.. New Photo Evidence Suggests < Previous
The 2nd Presidential Debate in Pictures Next >
Recommended stories you may like: