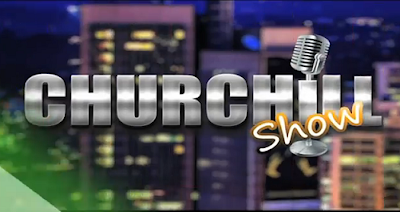 In what has come to be referred as ‘Madimoni at work’, footage of the premiere episode of Churchill Show last night disappeared without a trace. The former Churchill Live has been re-branded as Churchill Show, and was expected to make its grand premiere on Sunday night, immediately after the XYZ show. Enough promo had been done by NTV, its employees and those involved in the production of the show.

However, at around 7:40 PM, the station announced that the premiere of the show had been pushed to next week. This they did both online and on TV. Churchill himself also made the announcement. The explanation given by NTV was the traditional, unsubstantiated and boring ‘Technical Hitch’. This is what they tweeted.

Due to technical hitches,we will not be able to air the #ChurchillLive show as earlier promised. We apologise to all our viewers.
— NTV Kenya (@ntvkenya) February 10, 2013

Daniel Ndambuki in the meantime had a lot of explaining to do. Through a series of Tweets and Facebook posts, the comedian was quick to blame ‘dark forces’ for a data wipe out that is believed to have been the technical hitch.

Wa wa wa…you thought dark forces was a joke!!! Wacha niwaambie, I have been hit!!

And then he started ranting.

We thought it was a joke when we heard of dark forces!! how do you explain sudden memory wipe out mid final cut loading…yaani computer imejam kabsa! …sema frustration!! on behalf of technology niwie radhi.. wish everyone had come on Tuesday for the live show.

A dark force is one that invades your machines ghafla and cleans out memory including the final cuts.

I deeply apologize the show wont be aired.Technology failed us and final files were wiped out clean! Ni kama duramaa!! ..ni kama vindeo..

As with most human being, he had to look for a scapegoat, and he found it in Steve Jobs’ (RIP) brainchild Apple.

Wee hujui frustration until you are trying to have a conversation with a dead computer to give you back one file..apple has failed!!

Is it ok to say apple is overrated? I was sure we would never experience such life threatening technology fail

And still he would not stop.

Sasa those who came for the live recording share the happenings…

Regardless of technology fail..all the same! We still have the live recording on Tuesday and airing on Sunday

It’s not clear whether the footage was finally recovered or whether it included the raw footage or just the edited final video, but it’s clear this has been a very bad start for Kenya’s most watched comedy show.
© nairobiwire.com