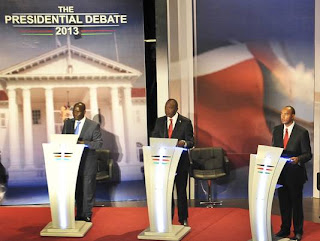 The Coalition for Reforms and Democracy, CORD has reacted to Uhuru Kenyatta’s withdrawal from the second Presidential Debate scheduled for Monday next week.

In a statement released yesterday, CORD says that Uhuru is afraid of answering hard questions about land, since the issue was on the table for discussion. They say the DPM has persistently evaded the land issue, and his withdrawal did not therefore come as a surprise.
“We know that he has always stated that if elected, he will address the issue of land, but we are asking how? We urge Mr. Kenyatta not to shy away from this issue; after all it affects everyone in Kenya,” the statement reads.

The statement further wonders why the government has not gazetted the names of the commissioners to the National Lands Commission. They say that CORD will do the needful immediately after taking power.

These People Just Spray Painted Graffiti All Over JKIA < Previous
A Letter To Kenya From A Concerned Brother Next >
Recommended stories you may like: