A Letter To Kenya From A Concerned Brother 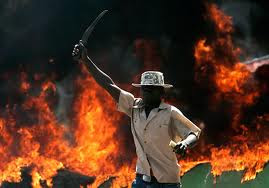 My name is RWANDA..Your small bro…This letter is a bit long…but anyway, how are You? Hope you are good…Just like Me… Sis,It’s long since we talked but this letter is urgent ! You have to do what I say!

Sis, in April 1994, the worst happened to Me. After the death of My President, Juvenal Habyarimana, who was a TUTSI, My people went totally crazy!
You see,The TUTSI and HUTU were the major tribes that I had…Now, the HUTU were smaller than the TUTSI and the TUTSI had held on to power for so long! And in April,madness began!

After a fierce propaganda campaign by the angry HUTUs, who wanted power too, I watched as the HUTU bought 581,000 machetes (pangas) from China.
I sadly watched as the HUTU also bought rocket launchers, mortar bombs,grenades and ammunition worth £18M from Egypt.
My heart was beating. My soul was scared. I watched, with sadness and fear, the media spreading false propaganda, lies and innuendo to the public! I even watched the CHURCH preaching hatred, ethnicity and war. I couldn’t believe this was happening. The stage was set for War. My children were getting prepared for the worst! Hate Leaflets were being spread. The HUTU were getting armed. The TUTSI were getting scared.

Sis, one sad morning, IT HAPPENED! I heard children screaming! I saw women crying! I heard men wailing! MY HEART ALMOST STOPPED! Sis, within 100 days, My children turned into animals! They butchered each other! Slaughtered each other! Ambushed each other! I watched as 1,000 TUTSI children were burnt alive in a Polish Catholic Church! I watched as 2,500 TUTSI men were bombed to death while hiding in a tiny, crowded Church! I watched sadly as around 250,000 girls were mercilessly raped and beaten to death! I watched as 400,000 TUTSI men lost their manhood after it was cut in public by the HUTU! I watched as 2,000 women were thrown into a pit of fire like dead houseflies! I watched endless rivers of blood flow in my streets! I watched children crying, children mourning their parents, children being slaughtered with machetes! I watched as USA President, Bill Clinton and the U.N peace keepers ignored Me! Letting Me destroy myself! I knew that was the END OF ME. It was sad! Painful! Unbelievable!

For 100 days, My children did the worst! It was blood, tears, sorrow, pain, death and agony! And Finaly, I LOST A MILLION PEOPLE! Yes, A MILLION Tutsi and Hutu died in just 100 days! When the madness stopped, I knelt and thanked God! They were fighting for a politician! Fighting for a tribe! Fighting for power! BUT what did they gain? NOTHING! Absolutely NOTHING! Until today, I HAVE NEVER recovered from the madness! I have so many scars, so much pain!
Sis, I see Your people are holding elections in less than a fortnight. I see You guys are getting ready! I see two major Kenyan tribes, LUO and KIKUYU, have the major Presidential Candidates. Sis, take My Word;

I ASK YOU IN THE NAME OF GOD, Please, DO NOT DO WHAT WE DID!

Sis, I LOVE YOU! Am always praying for You, I want the BEST for you! Take it from Me Sis, IF YOU DARE DO WHAT WE DID,  You will NEVER be the same again!!! Sis, I’m crying as I write this….my eyes are wet…My heart is heavy….
Sis, AM DOWN ON MY KNEES: I ASK YOU IN THE NAME OF JEHOVAH GOD, DO NOT DO WHAT WE DID!!! Do NOT! I would NEVER wish that ANY COUNTRY goes through what I did! NEVER!

Kenya, I LOVE YOU Sis! You are BIGGER than any tribe or any politician!
I wish you peace throughout the election process and there after.

Lots of LOVE from you Brother,
RWANDA.

CORD Says Uhuru Pulled Out of Debate Because of The Land Issue < Previous
The Official UhuRuto Android App Now Available For Download Next >
Recommended stories you may like: