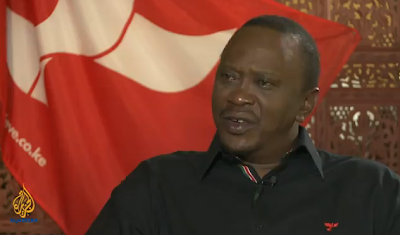 Uhuru Kenyatta was hosted on Al Jazeera this week, where he reiterated his belief that should Kenya elect him to be the next president, he will be able to govern while at the same time attend his court sessions at the Hague.
Kenyatta added that Kenya is not a banana republic, and that the absence of a president for a short period does not cause the collapse of all systems.

He further said that ICC has the wrong people, since neither he nor Ruto was vying for the presidency in 2008.

When the Talk To Al Jazeera host, Folly Bah Thibault tried to bring the small matter of Kenyatta being named one of Africa’s riches men, the Jubilee presidential candidate cleverly avoided getting into that.

Embedded is the full interview.

Mungatana Reveals Why He Ditched Karua < Previous
How To Know It’s A Nollywood Movie.. Reloaded Next >
Recommended stories you may like: