Mungatana Reveals Why He Ditched Karua 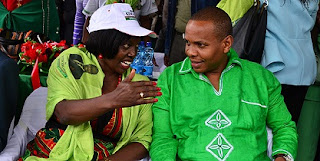 Garsen MP Danson Mungatana yesterday revealed why he ditched Martha Karua and her Narc Kenya party for TNA. Mungatana said he knew Karua would not win the presidency in the March 4 general election and she refused join the Jubilee Alliance.
He was addressing hundreds of TNA supporters after he was endorsed as the governor hopeful by Gasa elders from the Pokomo and Wardei communities of Tana River county.

“I quit Narc Kenya because the party is not popular. The battle for the presidency will be between TNA and ODM. I tried to convince Martha Karua to quit three times but she refused. That is why I decided to quit for the sake of my people,” he said in Hola town.
He said he joined “the winning party” in order to have bargaining power in the national government for his people. Mungatana said he is confident in his ability to lead Tana River as governor, citing his experience in politics and governance.
He said he has been an MP for 10 years and served as an assistant minister in various ministries during his tenure. Other Tana River governor aspirants are Ambassador Hussein Dhadho, former legislator Molu Shambaro, former KRA official Adam Dhidhe Barisa, Dr Badiribu Barisa and Tola Kofa.
the Star

Spanish Runner Intentionally Loses To Abel Mutai, After The Kenyan Mistook The Finish Line (Video) < Previous
Citizen TV The Most Popular Station With NTV Coming Second Next >
Recommended stories you may like: