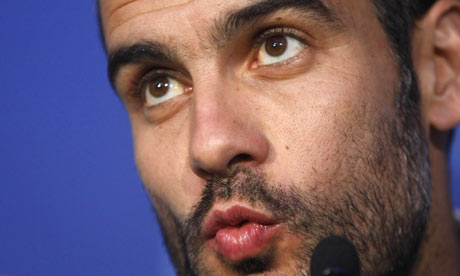 Bayern Munich on Wednesday officially announced it has hired Pep Guardiola to coach next season for an undisclosed salary over three years.

“Pep Guardiola is one of the most successful coaches in the world and we are sure that he can make not just Bayern, but all of German football shine,” Bayern CEO Karl-Heinz Rummenigge said in a statement on the club’s website.

The Bundesliga giants made the news official just one day after Bayern media director Markus Horwick described claims the club had approached Guardiola to take over as “complete rubbish.”
Guardiola, who is the first Spanish manager of Bayern Munich since the club’s promotion to the Bundelisga in 1965, had been linked with Premier League teams Chelsea and Manchester City as well as AC Milan in the past weeks. He replaces Jupp Heynckes, 67, who is completing his third stint as Bayern coach and who told the team he wanted to end his career when his contract expires at the end of the season.

Guardiola’s agent, Josep Maria Orobitg, told Efe Radio that the contract was signed on Dec. 20 before the holidays, and that Guardiola chose Bayern “because it was the best offer.
“We have been passing up offers,” Orobitg said. “This one (Bayern) is not the one that offered the most money. He has elected it for its organization and all the possibilities he sees for his players.”
“As an adequate replacement for Heynckes only [someone] of Pep Guardiola’s caliber came into question,” said Bayern chairman Uli Hoeness.

Bayern Munich has appeared in two of the past three Champions League finals, losing to Inter Milan in 2010 and Chelsea in 2012. The club leads the league table by nine points with 17 matches played.
The former Barcelona boss, 41, who last month admitted he wanted to return to coaching after taking a year off, had been linked with the Bundesliga club, according to a report in Sky Sports Italy.
Guardiola won 14 titles with Barcelona before stepping down last season.

On Tuesday during an interview as part of the launch of celebrations marking the English Football Association’s 150th anniversary, Guardiola said he wanted to manage in England.
“It is unique, to play in that league,” he told FATV. “I want to feel the supporters, the environment, the media and the style of the players. “I have always found English football fascinating. The support of the home team is amazing.”
ESPN

10 Things Women Find Unattractive In Men < Previous
5 Skills That Impress Women Next >
Recommended stories you may like: