Mike Sonko: I Will Stop Punching Walls But Will Keep My Mohawk If I Become Senator 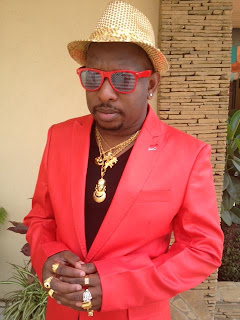 Immediate former Makadara legislator, Mike Mbuvi Sonko last night appeared on Citizen Television, where he was hosted by Belinda Obura. The station had earlier stated that both Sonko and the ODM‘s Nairobi senate candidate Margaret Wanjiru would appear on the show, for a showdown similar to the one featuring Evans Kidero and Ferdinand Waititu.

Margaret Wanjiru however pulled out at the last minute, saying that she was still sorting out some nomination issues. The interview however continued without her, and it was probably wise of her not to show up, considering Sonko was armed with his education certificates, probably waiting for the moment he would confront Wanjiru on hers.

Many Kenyans for the first time saw and heard Sonko speak in fluent English, and surprisingly, it’s not that bad. The controversial legislator also shocked Kenyans by effortlessly quoting the Bible and the constitution, proving that he’s indeed not an ’empty debe’.
When asked whether he will change his dressing if he becomes senator, Sonko used the constitution as his reference, saying that it protected him against any discrimination due to his dressing. He blatantly said he will not change and was at that moment wearing a hundred and one golden rings among other expensive jewellery. He also wore a cap written ‘I Love Haters’. When he briefly took it off, his trademark PEACE Mohawk was still present.
Sonko was however apologetic that he punched walls and slept on tarmac, promising never to do it again. He defended himself by saying he was still new in parliament then, and was still finding his way around.

When Belinda asked him what was the source of his wealth, Sonko said that land dealings have made him rich. He said that his father was a wealthy land and estate agent and he inherited that from him. He pointed out that he made his first 10 million while still in school. The former MP denied vehemently dealing in drugs, claiming that he does not even know how they look like.

He concluded by telling his competitor Margaret Wanjiru not to fear facing him on TV, and that he loves her and respects her and will not abuse her. Borrowing Miguna Miguna’s words, Sonko told Wanjiru to ‘Come Baby Come’.
© nairobiwire.com

No More Mini Skirts For Kenyan Lawyers < Previous
The Lady Who Gives Mike Sonko The PEACE Mohawk (Pictures) Next >
Recommended stories you may like: