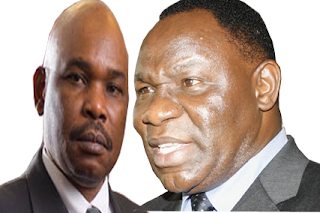 If you’ve been following the news lately, you might have heard that the government is cracking down on people who spread hate speech on social media. As the announcement was being made, Bitange Ndemo mentioned Sunday Nation columnist Makau Mutua as a person whose opinion the country would be better off without. He went ahead and called his Sunday piece ‘garbage’.

That did not go down well with the University dean. On Wednesday night and the whole day Thursday, Makau Mutua has been ranting on Twitter, and at some point the Information PS joined in. The two defended their positions, with Makau Mutua threatening to take legal action against the PS more than once.

Some of the dean’s early tweets include:

Why would the Ministry defend one candidate? PS Ndemo Bitange should know defamation laws exist, and can be invoked.

He then addressed the Information PS

@bantigito Your utterances against me were KANU-like and beneath the dignity of your office. Beware of defamation laws.

@makaumutua Prof. I respected you as a scholar and great son of Kenya but on Sunday you were off the mark.

@bantigito Ndemo, be specific. What exactly bothered you so much in my column? Write a response to it, but don’t threaten me.

And the PS was ready to elaborate,

@makaumutua I will respond to it. You discredited IEBC when you know the danger it posses as in 2007.

@makaumutua IEBC problems are cased by politicians and a hopeless procurement law. They did not move nominations to 17th.

@makaumutua You know the constitution is to be implemented progressively but you blame IEBC for not registering diaspora.

@makaumutua Prof. You are bright but I wonder why you sit on the fence only to complain about our inability to serve you.

In 2007 the crisis stared with discrediting ECK @makaumutua discredited IEBC as having “gone south”.

@Reinhard_Asamo the trouble with such remarks is setting stage for disputing results. That is why we must not repeat 2007.

It was then Makau Mutua’s turn.

@bantigito You must apologize. A senior bureaucrat like you must never try to suppress free speech that informs and educates.

@bantigito Read my 2008 book – Kenya’s Quest for Democracy: Taming Leviathan – and tell me if that’s sitting on the fence.

@bantigito You must tell Kenyans what in my articles qualifies as “hate speech.” Is your job to monitor speech and defend IEBC?

Bitange Ndemo must come clean and tell Kenyans who he’s defending, and speaking for. Why the anger? Who sent him to attack me?

@makaumutua Prof. I was simply explaining the dangers of discrediting IEBC now as that will mirror the genesis of 2007 crisis.

@makaumutua Your are arriving at some conclusion before you understand the context which I made the remarks.

@makaumutua Yes we are monitoring media and given that we learnt from the previous crisis, we have to protect peace.

Makau Mutua was not leaving it at that.

@bantigito Your rant against me sounded as if you had been visited by “devils” and “dark forces.” Crude and utterly unbelievable.

@fmgambi @bantigito Thanks, Dr. Mugambi. The forces of impunity think they can intimate sunlight by darkness. They’ll fail.

As night came, the discussion had to end, but most probably they’ll pick it up today.
© nairobiwire.com

Pictures of The Sh 2 Billion – 180,000 A Night Kenya Red Cross Boma Hotel < Previous
Mourinho Watches Man U – Liverpool Match, Amid Speculation He May Be Next United Manager Next >
Recommended stories you may like: