KWS Arrests 4 Chinese Men In Naivasha For Cooking A Snake 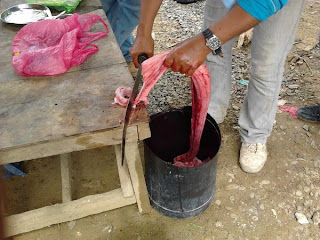 Police in Naivasha are holding three Chinese and a Kenyan after they were arrested cooking a snake.
The four were arrested in Olkaria area by Kenya Wildlife Service officers following a tip-off that they had killed a Black Mamba and were cooking it.

Drama unfolded at Naivasha police station where the suspects were taken after the snake which had been brought in a cooking vessel was displayed.
Tens of their countrymen flocked the police station enquiring on their fate as KWS officers took the exhibit for safe keeping.
The Chinese are involved in the construction of the Olkaria IV power plant, the biggest in Africa and there has been complains of them eating snakes and dogs in the area.
According to a witness, the foreigners had made it a habit of visiting the nearby Hellsgate national park for snakes.
Confirming the incident, Naivasha deputy OCPD Paul Korir said that the four would be arraigned in court on Monday.
“KWS officers were informed and moved in, arresting three of them as they prepared the ‘snake stew,’” he said.
“KWS officers acting on a tip off found four men including three Chinese cooking a snake which is against the law and they were arrested,” he added.
Korir added that the four had been released on cash bail pending the case as investigations into the incident continued.
By Antony Gitonga for Standard