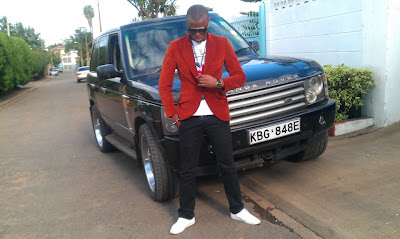 Gospel artiste Ringtone was over the weekend under attack from his Facebook fans, joining the growing list of celebs taking that road. Ringtone posted a picture, with a caption that did not go down well with majority of his fans.
He posted a picture of him with a white lady, with the following statement.

I met this lady in Nairobi city CBD she told me she loves my music and would like to get married to me but I refused and told her if she wants to be my wife she has to sell all her wealth and give to the poor then come to be my wife.

His wording attracted a lot of bitter reaction, with the post generating more than 500 comments, from a Facebook page with less than 7000 likes. Unfortunately, most of them were negative, with a good number rated R. At the time of this writing, the singer had not deleted the post, and it seems he’ll not because hours later, he was telling his fans to unlike his page instead of abusing him. This was his plead.

I WANT US TO PUT TO AN END THIS ABUSES,IF YOU MAY HAVE LIKED THIS PAGE BY MISTAKE KINDLY HUMBLY UNLIKE IT AND GO IN PEACE.I PROMISE YOU THAT IF I NEVER DIED ON THE STREET SUCCESS IS MY PORTION IN JESUS NAME.I RELEASE YOU ALL HATERS NOW DONT SAY ANYTHING AM HUMAN AND I NEED LOVE. 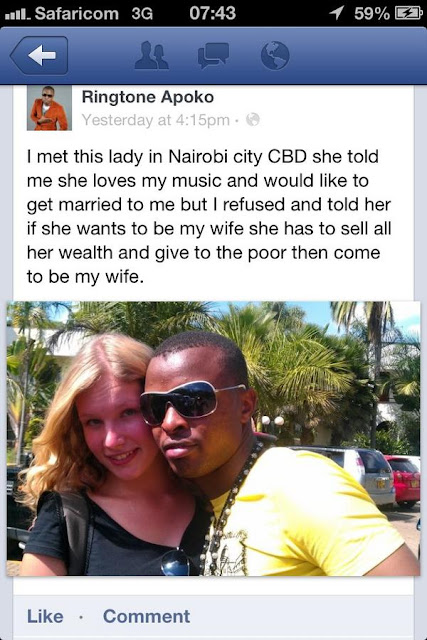 And below are some of the comments the post received, including one where Ringtone himself apologized.

u nid to grow up, u r behaving like a teenager, so what ?

The man drives a range mbona hajaiuza.plz plead your case to God and not try to amuse us. its the most hilarious statement av heard.4 christs sake,ai!

u guys don abuse apoko, he can be smarter than this, jus needs to grow up kiasi, he shud nt post this stuff, they don make sence

Real men are not intimidated with their women’s success

what has it to do wth kenyans? we have enough to thnk about. style up young man…..

Whatever they call you Rington just keep moving on the right direction i saw you on first at our camp on what we did on chokoras,my advice dont go for a muzungu take our Local beuties

Reading through some comments and i don’t know what is worse: the insults or the fact that some pple can’t spell!

Can u do that urself mr APOKO?

U mean u pulled a ‘Zacheus the tax collector’ on the poor lady?

seriously do u hve to boast abt letting down her proposal..wat if she reads this?..hw can u not care abt her feelings?…with all due respect Mr.Apoko this was unnecessary n down right evil of u.

AM VERY SORRY TO ALL THOSE PEOPLE THE POST HAS HURT.YOU MY FANS AND SUPPORTERS I CAN NEVER WANT TO HURT YOU.I WAS ONLY TRYING TO MAKE A JOKE WHICH I THOUGHT WILL BE FUNNY BUT I HAVE REALISED IT OFFENDED YOU.POLE ONCE AGAIN – Ringtone

Hehe…..wat happend to being humble and ‘wat one does in secret, the Lord shall bless’….?????
Shame!

Jus so knw she cn sue u for defamation…..defaming her taste in men

lead by example. sell yours and she wil follow suit.

aaaaaaaawwww Ringtone ame apologize hapo juu,tafadhalini kueni na utu..he says he posted it as a joke and obviously we Kenyans take things so seriously nikiwa mmoja wao ,Am soory too Ringotone for throwing harsh words at you.Mi nmekusamehe and i actually find it funny now LOL

8 Signs That He Will Marry You < Previous
The Flashy Cars TEAM UHURU Is Driving (Photos) Next >
Recommended stories you may like: