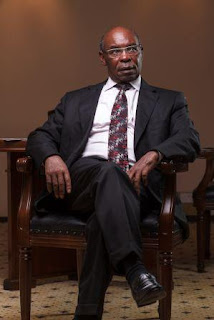 CORD’s announcement on Saturday that media mogul SK Macharia was part of its summit has received mixed reactions from Kenyans. Immediately the announcement was made, Macharia became a trending topic on Twitter, with most comments unfortunately being negative.

Most people saw his involvement with CORD as their divorce with Citizen TV and its vernacular  radio stations. However, some lone voices tried to convince others that Macharia was in CORD as an individual and not as Royal Media Service, and that his stations would not be ‘more biased than they’ve already been’. On Facebook, one commenter wrote,

C’mon, SK did not just wake up to named in the summit, he has been supporting Raila all along, and if you’ll stop watching Citizen now, then no difference if you stopped years ago.

Many were caught off guard by the move, and some vowed never to watch Citizen TV again. Their explanation was that the station would now be completely biased. As the joke went, ‘considering how SK Macharia uses his stations to announce his sneezing, it would be anyone’s guess what he’ll do for CORD.’
The following are some of the comments adapted from twitter.

SK Macharia is the ultimate business person. Risks are what makes the difference.

And as soon as SK Macharia was announced to head the #CORD Summit, The Tononoka Rally split screen on @citizentvkenya was cancelled!

Sk macharia is part of cord, no wonder nowdays i feel like vomitting when i watch citizen.

But #SKMacharia should be sitting on the fence!! #CORD. Pia #K24. May be they are competing!

SK Macharia airs what he wants it’s his business, start yours.

How diffrent is SK Macharia being in support of #CORD and UK owning K24,KamemeFM and people newspaper.

It will be very difficult for @CitizentvKenya to report objectively, with it’s owner and chairman SK Macharia becoming a #CORD member.

Now that media owner SK Macharia is a member of CORD, shud other coalitions & parties expect any +ve coverage from his 15+ media outlets

Now that SK Macharia has been CORDed do we expect impartial news from Royal Media Services??il try K24 or NTV.

SK Macharia is in the CORD summit . Now we know where Citizen lies”

SK Macharia has split his company’s political allegiances right down the middle! I bet his staff supports TNA

Already, talk in Central Kenya and other Jubilee strongholds is that they should abandon anything affiliated to SK Macharia. A spot check reveals that most pubs and hotels that previously trusted on Citizen are switching to the more ‘friendlier’ K24.
However, news content aired by the station does not reveal extensive bias as portrayed by people. On Sunday, the station was among those airing the Jubilee National Delegates Conference live from Kasarani. On the other hand, K24, in which Uhuru is believed to have majority ownership has failed to air some of CORD’s rallies including the recent Tononoka rally, where other stations split their screens.

The decision by SK Macharia to go public with his political stand may have grave implications on his businesses, but at least he’ll go down in history as probably the first media owner in Kenya to declare his stand. The truth of the matter has however been that every station and its directors have their preferred candidate, but none declares their stand publicly. In 2007, reports revealed that KTN was pro ODM, while KBC were pro PNU. Incidentally, Citizen TV and NTV were occasionally named as the most neutral of the main stations.
© nairobiwire.com

NTV’s Linus Kaikai Wedding Pictures < Previous
Peter Kenneth Tells Off Mutahi Ngunyi, For Telling Him He’ll Lose Next >
Recommended stories you may like: