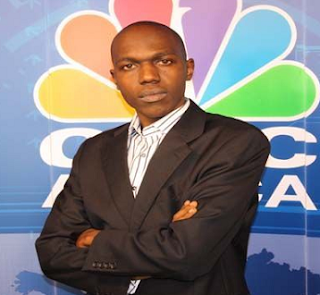 Business journalist Larry Madowo finally confirmed rumours that he had resigned from CNBC, barely 9 months after joining it. Madowo who rose to be one of Kenya’s best business reporters, left KTN a few years back for NTV. At Nation Media Group, he helped the station launch their afternoon business show, PM Live.
Back in April, the reporter announced his resignation on twitter and he followed the same road this time. Then, he wrote, “This is my last week @ntvkenya. It has been a great experience and I’ll miss everybody here so much. To endings & new beginnings!”
This was his tweet yesterday.

I have enjoyed my time at @cnbcafrica in Johannesburg & Nairobi. However, it is time to move on. This ship is setting sail for ‘home’
— Larry Madowo (@LarryMadowo) December 5, 2012

Larry Madowo had been operating from CNBC’s Nairobi bureau, with frequent trips to Johannesburg, where the station is based.
Speculation is rife that the reporter is headed back to one of the stations he came from. KTN has in the past few days poached several NTV reporters, and maybe they decided to bring back Madowo. The reporter will however take to twitter to announce his new destination… as always.
© nairobiwire.com
Mudavadi Agrees To Be Majority Leader And More Shocking Transfer Deadline Day News < Previous
28 Signs You’re Wasting Your Youth Next >
Recommended stories you may like: