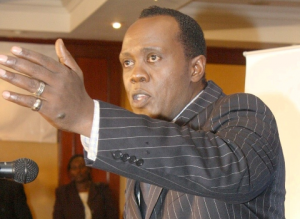 Back in September, we told you that Jeff Koinange was about to leave K24 for a new international TV set to be launched soon. Well.. it’s now official, Jeff Koinange has resigned from K24, and yes, he’s taking the job he was offered months ago.
The journalist has been offered a $ 1 million a year contract, to leave Kenya and head to South Africa where he will reportedly be a chief anchor for the yet to be launched Arise TV. He is reported to have issued his resignation notice on Wednesday, to the disappointment of his bosses.
Through his twitter handle, Jeff has already confirmed that he is indeed leaving the Uhuru Kenyatta owned station.

@AaronRimbui We’ll still have the ‘Best of The Year’ for the next couple of weeks, Bro….

The pianist then wished him all the best at his new station. “@KoinangeJeff your show’s been why I watch K24!! All the best in your new endeavors!”

In reply to Martin Muroki, who tweeted, “@KoinangeJeff ALL KENYAN,ALLTHE TIME. Congratulations bro!Wishing you all the best in your new endavour.Thats the end of me watching K24”, Koinange wrote:

@OleMartinezM Thanks, Bro….but don’t stop watching K24….we Started something GOOD…and it will continue being GOOD with or without me!!

The reporter would not however leave for South Africa without castigating one Robert Alai. The controversial blogger had unleashed a series of tweets attacking Jeff.

After playing propagandist for Uhuru, Jeff Koinange is now avoiding future prosecutions in case of election related violence by moving to SA

nobody will pay Jeff Koinange $1 million to work for him. Do you know what $1 million salary is? You are joking

If you are believing rumours that anyone is paying #JeffKoinange $1 million salary per month, you are just the most stupid person alive.

I am sure that Jeff Koinange is not going to earn more than 15,000 USD per month. Wacheni ufala.

The reporter had this to say about him..

Arise TV is owned by Nigerian billionaire Nduka Obaigbena. It’s launch date is said to be only weeks away, and it has been recruiting heavily. The station will be headquartered in London, with news centres in Johannesburg, Rio De Janeiro, Delhi, Beijing and bureaus in New york, Nairobi, Lagos and Dakar. Just like CNN, Arise TV will have the resources to broadcast live from any part of the world.

So, where does this new development leave K24? Many have argued that it leaves it where it started – nowhere. The station made the one mistake of making Jeff its backbone to the extent of some labeling it Koinange24. The reporter has been hosting at least 3 shows on the station. Capital Talk has been his most popular, with little argument that no one will be able to fill that gap. Recently, the station launched ‘Sunday Wrap’ to take away Citizen TV’s Sunday Live market share, and Jeff has been the host. He has also been going round the country hosting ‘Face The Nation’. The three programs, in the order they appear could easily be the three most watched programs on K24, leading to the assumption that, with Jeff Konange gone, it is RIP K24.

Uganda Cranes CEO Goes Into Exile After Newspaper Publishes Pictures of Him Sodomizing Player (PG) < Previous
Thika Road’s Letter To Waiyaki Way (Hilarious) Next >
Recommended stories you may like: