"We Will Not Advertise On Daily Nation" Naikuni Threatens 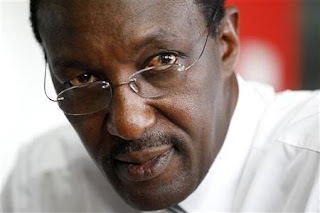 A source familiar with the ins and outs of national carrier Kenya Airways has informed us that the airline’s Group Managing Director and CEO Titus Naikuni was foaming at the mouth yesterday over an article in the Sunday Nation which laid bare the shadow dealings KQ is involved in especially in the acquisition of new planes.
According to the source, Naikuni was so angry he even threatened to ensure that KQ would stop advertising in the Daily Nation, the country’s leading newspaper.
The article that earned Naikuni’s ire laid bare KQ’s secretive dealings with some ‘connected’ individuals to secure the purchase of second hand planes through dummy companies registered in the Cayman Islands. Just in case you didn’t get that. Secretive deals, connected individuals, second hand planes, Cayman Islands. All of that spells one thing: SCANDAL.
KQ has recently latched from scandal to scandal and Naikuni must now be feeling the heat of all the negative publicity. For a man who was previously a darling of the media, this avalanche of ‘stink’ must be unfamiliar territory.
Those in the know say Naikuni is looking for an opportunity to take a ‘dignified exit’ from KQ (reportedly to pursue some political ambitions of his own!)
d-post
‘Bad Boy’ Afrosinema Star Coming To Kenya < Previous
Implications of Having President Uhuru & Vice President Ruto Next >
Recommended stories you may like: