Available for iPhones, Android and Blackberry 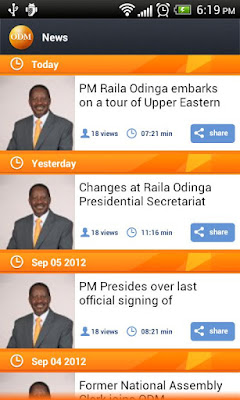 Prime Minister Raila Odinga has just released a mobile phone application strategically targeting the tech savvy youthful voters. The campaign app is available on all leading platforms namely: Android, Apple’s ios and Blackberry.
The app has been developed to deliver live news feeds, videos and pictures. It has adequate integration with social media sites namely Facebook and Twitter. It also comes with Aurasma integration which basically brings along augmented reality.
Aurasma, who are Tottenham’s shirt sponsors, were delighted to be working with Kenya’s prime minister. Matt Mills, Head of Partnerships at Aurasma is quoted as saying, “”It is an honour to work with Prime Minister Raila and the Blue Storm Solutions team on this important project, The Aurasma-enabled app is making it easier for voters to engage with Kenya’s democratic process. We are now working with 10,000 partners in over 100 countries worldwide and are absolutely delighted that our first ever partner in Kenya is none other than the Prime Minister himself.”
Commenting on the use of Aurasma, Raila said, “By using Aurasma in our campaign app, we will be able to reach out to voters in a completely new way, making it easier for them to get information about the Presidential election process and my policies if elected. It is important to make politics accessible and satisfy Kenyan’s appetite for the latest technology and I am delighted to do both with the launch of this app.”
The app is available at no cost from the respective stores, ie. Google Play, Apple Store and Blackberry app world.
© nairobiwire.com
Misunderstanding on Why Husband And Wife Rarely Make Love < Previous
What Uhuru And Maina Kageni Drink.. Shocking… (Social Media’s Best Pics This Week) Next >
Recommended stories you may like: