NTV’s Curvaceous news anchor, Linda Oguttu, has tendered her resignation from the station. Linda confrimed her departure from the station through her personal twitter handle @lindahoguttu, through this tweet.

Just made a final exit from NTV. Am grateful for all the support I have received from different quarters……Let me begin a new journey.
— Lindah Oguttu (@lindahoguttu) November 15, 2012

Constant queries by her fans over her new destination did not recieve straight answers. She promised to reveal her new employer soon. One Kepha Atika asked her, 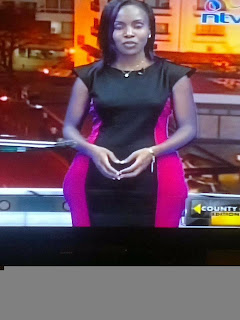 @lindahoguttu: Jaber you must be joking! All the best in your new endeavor. When are you making your debut in your new station?

To which she replied.

However, despite her silence, the cat has been out of the bag for quite some time now. She is most likely headed to KTN, following in the footsteps of Moha Jicho Pevu.
NTV has in the past few weeks lost several of its top journalists to their Mombasa Road based rival. Mohammed Ali quit the station barely 3 months after joining it, and headed back to KTN. John Allan Namu is believed to be facing the same direction, with Joe Ageyo right behind.
Among the grievances given by Mohammed Ali and John Allan Namu is the lack of independence in the course of their investigative work. Apparently, the station is heavily influenced by politicians and businessmen, and investigative pieces touching on some influential figures are largely watered down during the editing part.
© nairobiwire.com
How Kibaki Celebrated His Birthday < Previous
The World’s Poorest President Next >
Recommended stories you may like: