By Ken   /   Sunday, 28 Oct 2012 07:05PM   /   Leave a Comment
A village chief, Cuthbert Kasikai Majada died last week after his manhood remained erect for a month. The strange incident is said to have occurred after the chief was caught sleeping with his nephew’s wife. 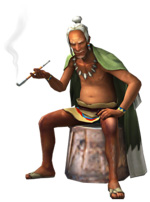 After catching Kasikai with his wife, the nephew didn’t react but only told villagers that he will deal firmly with the chief.
A few days later, Kasikai started getting erections that wouldn’t stop. He  started spending much of his time at home with his wife in bed for relief but he kept on getting erections barely an hour after making love to his wife. This continued for a whole month before concerned family members decided to take the chief to the hospital.
Sources also alleged that Kasikai was in the habit of sleeping with married women.
He died after a day in the hospital as baffled doctors could not understand how to cure Kasikai’s  ailment.
By David Odongo, for Standard

Kenyans Love Facebooking When Drunk < Previous
Trey Songz Coming To Kenya ?? Next >
Recommended stories you may like: