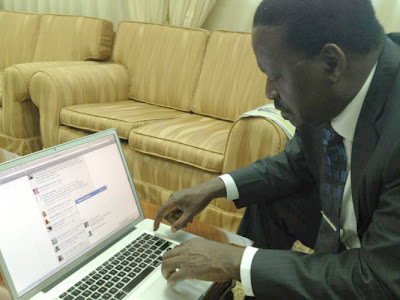 Leader of the New Patriotic party and presidential candidate in Ghana.
1,640 tweets 35 following 6,132 followers
The opposition leader is hoping social media can propel him to victory in forthcoming elections. One of numerous recent tweets declared: “In #48days, we will go to the polls to decide between two profoundly different visions for the future of #Ghana. #VoteNana2012.”

Education, sport, arts and culture minister in Zimbabwe.
2,962 tweets 280 following 6,600 followers
The Movement for Democratic Change politician regularly tackles politics and sport. “‘The Minister is sleep WORKING on duty,’ Zanu PF’s Jonathan Moyo blaming me for the Warriors loss against Angola in the Herald today!”

President of Rwanda.
2,161 tweets 0 following 82,510 followers
Kagame was involved in an infamous Twitter spat with the British journalist Ian Birrell, who tweeted that Kagame was “despotic” and “deluded”. The president hit back: “Not you either … no moral right! You give yourself the right to abuse pple and judge them like you r the one to decide …”

Deputy prime minister of Kenya.
1,364 tweets 48 following 76,169 followers
When finance minister, Kenyatta reportedly asked his followers for input into the budget. But not every post by the politician, facing a trial at the international criminal court, is riveting: “Had a great time with my wife at the James Ingram concert last night. Have a blessed Sunday as we prepare for the week ahead.”

Deputy minister of communication, science and technology in Tanzania.
6,044 tweets 1,956 following 18,968 followers
Engages in politics, humour and philosophy. Recent tweets include: “Permanent Secretary. When a job title starts with the word ‘Permanent’, there will be problems” and “I’m a Muslim. My Mom is devout Catholic. She prays for us everyday. She covers herself and participate when we have Dua. We can coexist.”

Former president of the ANC youth league in South Africa.
4,810 tweets 103 following 234,486 followers
The firebrand populist used to dismiss Twitter and there were several hoax accounts in his name. Now making up for lost time with declarations such as: “I will never be intimidated by those who r playing to the gallery and seeking attention at my expense. I shall remain focused and unshaken.”

Leader of the opposition Democratic Alliance in the South African parliament.
4,667 tweets 432 following 36,612 followers
One of the most active tweeters and retweeters in South African politics, with a sprinkling of personal commentary: “Yep. CT [Cape Town] Airport is now where I catch up on grooming! :-\ @jo_annstrauss Quick pedicure at King Shaka airport – 10 minutes before boarding!”

Commerce and industry ministry in Zimbabwe and leader of a breakaway faction of the Movement for Democratic Change.
2,633 tweets 6,892 following 7,017 followers
Ncube offers an insight into the daily frustrations of working in a coalition government with the Zimbabwean president, Robert Mugabe, and prime minister, Morgan Tsvangirai. And of life in general: “In 4 weeks’ time, everything stops in the country. Mid-Nov xmas mood takes over n decision-makers will be off to shiny ships in the sea.”

Prime minister of Kenya.
1,146 tweets 81 following 85,799 followers
A prolific tweeter with 23 messages posted on 18 October alone. The focus is mainly policy and patriotism. He may have won some votes by stating: “I would like to make it clear as I did this past weekend that I am against the MP’s gratuity bonus.”

Western Cape premier and leader of South Africa’s opposition Democratic Alliance.
13,986 tweets 1,843 following 188,283 followers
Zille has sometimes proved trigger happy and gaffe-prone. She referred to Eastern Cape pupils who flocked to the Western Cape for a better education as “refugees” and described the musician Simphiwe Dana as a “professional black”.

The Incredible Life of ‘President’ Kingwa Kamencu < Previous
How Kisii People Pronounce Names Next >
Recommended stories you may like: