Man U – Chelsea Ref, Mark Clattenburg Has A History With Controversy 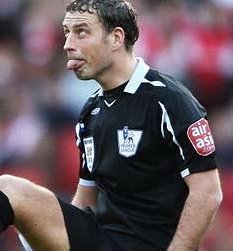 1975: Born March 13 in Consett, County Durham.
2000: August – Takes charge of his first Football League match between Chesterfield and York aged just 25.
2004: Promoted to the Premier League’s Select Group and referees his first top-flight game between Crystal Palace and Everton.
2005: January – Fails, along with his assistants, to spot Tottenham midfielder Pedro Mendes’ shot had been fumbled over the line by Manchester United goalkeeper Roy Carroll in a match at Old Trafford.
2006: Becomes a FIFA referee.
2007: October – Sends off Everton’s Tony Hibbert in a Merseyside derby after initially appearing to be about to show him a yellow card only to change his mind and pull out a red after a brief exchange with Steven Gerrard. He later did not send off Dirk Kuyt for a two-footed lunge at Phil Neville. Clattenburg did not referee another Everton match until 2012.
2008: August 6 – Suspended pending a probe into his business affairs following allegations he owed £60,000 as a result of a failed venture. Pulled out of the FA Community Shield clash between Manchester United and Portsmouth as a result and later sacked by the Professional Game Match Officials board.
2009: February – Reinstated as a Select Group Referee on appeal, but suspended for eight months from August 6, 2008, for “issues relating to his private business affairs”.
2010: October – Correctly, if controversially, allows a goal to stand between Manchester United and Tottenham when Nani tapped the ball in after Spurs goalkeeper Heurelho Gomes put the ball down, believing his side had a free-kick. Clattenburg had not blown his whistle.
2012: February – Referees the League Cup final between Liverpool and Cardiff.
August – Takes charge of the Olympic men’s football final between Brazil and Mexico at Wembley.
October 28 – Accused of using “inappropriate language” toward two Chelsea players during their defeat to Manchester United in a formal complaint by the club to the Premier League.
October 29 – The Football Association open an investigation into the allegations made by Chelsea.
Kenyatta University VC, Olive Mugenda’s Car Involved In An Accident < Previous
James Mwangi Leads Forbes Person of The Year Nominees Next >
Recommended stories you may like: