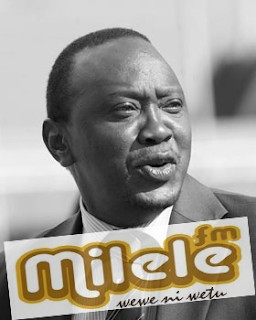 After weeks of speculation, Deputy Prime Minister Uhuru Kenyatta has finally acquired Milele FM. Uhuru had been reported severally to be eyeing the radio station through his company, MediaMax. He is reported to have acquired Milele FM together with another station, Mbaitu FM. The DPM through Mediamax now owns 4 radio stations: Kameme FM, Meru FM, Milele FM and Mbaitu FM. Recently relaunched K24 and People newspaper are also in his name.
Mediamax activities are now slowly transforming Uhuru Kenyatta into a media mogul of a similar level to Royal Media’s SK Macharia. The deputy premier acquired Mediamax from Rose Kimotho a few years back, before buying the People Newspaper from Kenneth Matiba and incorporating it into the Mediamax family.
As the elections approach, politicians have take up acquisition of radio stations in a bid to influence listeners to vote in a particular way. Among those who are believed to have radio stations include:
Chirau Ali Mwakwere – Kaya FM
Najib Balala – Pilipili FM
Henry Kosgey – One FM *
Cabinet minister Esther Murugi is also reported to be interested in having one too. It has been reported that her Nyeri based radio station is only a few weeks to launch
© nairobiwire.com
AC Milan Owner Silvio Berlusconi In Malindi For Holiday < Previous
Extremely Revealing Pictures of Citizen TV’s Michelle Morgan Next >
Recommended stories you may like: