Birds of A Feather… 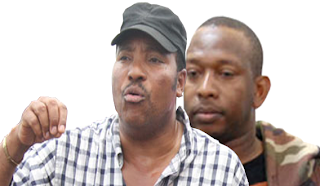 Yesterday, their were murmurs that fugitive Ferdinand Waititu was hiding in Mike Sonko’s house. We choose to ignore them since they were largely unsupported. However, Nation is reporting that Sonko is in fact the man who helped Waititu sneak out of parliament.
Yesterday, we told you that Waititu may have escaped in the boot of a car belonging to one of his colleagues, and acting Nairobi Provincial Police Officer, Moses Ombati confirmed this. When asked how the MP escaped, he said, “We do not know how he got out, but we are still looking for him. He must have hidden in a boot of a car because police were inspecting passengers and drivers of all outgoing vehicles.” What was not known then was that the escape vehicle belonged to none other than Makadara legislator Mike Sonko, known to be equally if not more stubborn than Waititu.
At around 7 o’clock, 3 vehicles entered parliament and stayed inside until around 8:30 when they left. The leading vehicle is known to belong to Sonko, with the rest probably belonging to him too. Earlier, the legislator was seen ‘hanging out’ in parliament well beyond the House sitting hours, despite being on sick leave. He is believed to have come to ‘pick up’ Waititu, because they both went missing at around the same time.
However, Sonko denied setting foot in Parliament whole day Tuesday. “My car did not come to town yesterday. It was at Buruburu. I spent the day at the Nairobi Hospital visiting sick constituents,” he told the Nation. He however added that Waititu’s case is just a slip of the tongue and he should be forgiven.
Additional reporting by Nation
© nairobiwire.com
That Moment When You Realize Your ‘iPone’ Will Be Switched OFF < Previous
Ken Walibora Releases Statement On His Genital Exposure Next >
Recommended stories you may like: