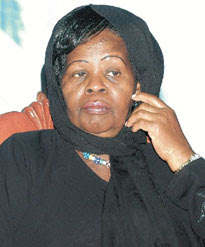 On Monday, there were rumours on Social Media that first lady Lucy Kibaki was admitted at the Aga Khan University Hospital Private Wing in a not very good shape. It was alleged that she was previously at the Karen Hospital before being transferred.
Several people reported seeing President Kibaki at the Parklands based hospital without his official motorcade on Monday. Though police were deployed around the area, their presence was minimal and not conspicuous. The Star newspaper reported that they were ordered not to use any radio communication, but instead use their mobile phones. However, when asked about the president’s visit, head of the Presidential Press Service, Isaiya Kabira said that the “the president does not go to Aga Khan”.
Lucy Kibaki has been extremely silent since the beginning of the second term of Kibaki’s presidency. During the first term, Lucy would accompany Kibaki almost everywhere, with some occasional lone trips. She mesmerized the country, when she walked into Nation offices along Kimathi Street to express her dissatisfaction, over a newspaper article.
Kenyans have for some time now, been wondering what happened to their first lady, and maybe it would be advisable if she appeared on TV once in a while. We really hope that she is fine.
© nairobiwire.com
10 Rules To Know If Your Phone Is Fake (Hilarious) < Previous
IEBC Commissioner Impregnates His Sisters Next >
Recommended stories you may like: