End Of The Road For Mutua’s Government Briefings. 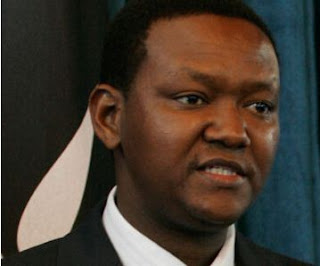 Government spokesman Alfred Mutua today tendered his resignation so he can contest in Machakos County governor position next year. Mutua joins several other civil servants who have resigned in recent days as per the constitution. Public office holders are supposed to resign six months before the election date if they will be vying for any seat. Today, Monday 3rd September, was the deadline. The government spokesman is expected to join Kalonzo’s Wiper Democratic Movement.
Earlier, Livestock PS Kenneth Lusaka had also tendered his resignation. Others expected to have left their job by the end of the day include: Mohammed Wamwachai, PS Forestry and John Lunyangapuo, PS Public works. Lusaka wants Bungoma’s governor seat, Wamwachai will vie in Kwale and Lunyangapuo is eyeing West Pokot senate seat.
Other top government officials who have resigned include, James ole Kiyiapi, who is in the race to State house, Kenya’s ambassador to China, Julius Sunkuli, who is interested in Narok seat, Kenya’s ambassador to Australia, Stephen Tarus, who is eyeing Nandi County governorship, and Kenya’s Ambassador to Belgium Kembi Gitura, who is eyeing a seat in Murang’a.
© nairobiwire.com
How The Media Helped ‘Campus Divas For Rich Men’ Gain 40,000 Likes In One Week < Previous
TPF’s Dr Mitch Egwang Anguishing In Sh 10 Million Debt Next >
Recommended stories you may like: