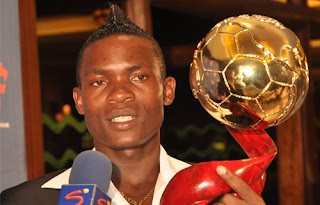 When George ‘Blackberry’ Odhiambo left Gor Mahia some years back, it looked like his football career was about to take off. He was signed by Denmark second tier side, Randers on a four and a half year deal. He had been the named player of the year (2010) and sure enough Gor fans were going to miss him. However, many of the club’s fans felt proud that one of their players was starting to make it big.
A year after his arrival in Denmark, which was barely quarter way into his contract, his stay was cut short. It was reported that Blackberry had a strong desire to return to Kenya and Randers had agreed to terminate the contract. The official statement from the club read, “Randers FC has met George Odhiambo’s desire to annul his contract. This, combined with a strong desire to return to Kenya has led to George Odhiambo and Randers FC jointly agree to terminate the contract.”
There was definitely more than met the eye. Given a choice of Denmark and Kenya, not many football players would choose the latter.
When Blackberry left Randers, he was signed by Tanzanian side Azam on a two year contract. Barely 4 months into his contract, MichezoAfrika.com is reporting that he has been fired. Apparently, he violated the terms of the contract and the club was left with no choice but to let him go. He has however reportedly been signed by another Tanzanian side Mbitwa Sugar.
With all this contract violations and terminations, what could be ailing the once promising George ‘Blackberry’ Odhiambo?
© nairobiwire.com
Fake Journalists Taking Over Nairobi Press Conferences < Previous
Miguna Given Hero’s Welcome In Nyeri Next >
Recommended stories you may like: