By Ken   /   Wednesday, 08 Aug 2012 11:29AM   /   Leave a Comment
The reigning 100m world champion now wants to take to the football arena and he believes he could also be a great success in the fields. Bolt has a great interest in soccer being a die hard fun of Manchester United.
Yesterday he admitted it would be impossible to turn down a chance for trials at Old Trafford. “People think I am joking when I say that I would like to play for Manchester United. I wouldn’t take up the challenge if I didn’t think I was good enough. I’m a very accomplished player and know I could make a difference. I’d be the fastest player, but I can play as well.” he said. 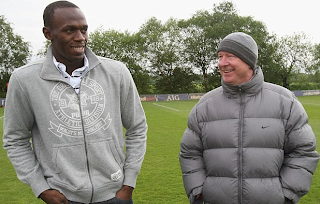 Bolt had visited Manchester United’s training ground earlier in 2009 and his skills then were good enough to give former United winger Cristiano Ronaldo some sprinting lessons. “I feel that I really helped Cristiano Ronaldo become a more complete player.” he added.
Veteran United defender Rio Ferdinand showed support for this as they tweeted with Bolt, United striker Wayne Rooney had this to say on Bolt,” He’d obviously add a bit of speed to the team! But they are different sports. I think he’s best staying on the track !”
© nairobiwire.com
Kemboi Dance Video Goes Viral With Over 300,000 Views < Previous
Goal.com Launches Dedicated Kenyan Edition Next >
Recommended stories you may like:

Willis Raburu Warns of Imposter: “10 Over 10 Does Not Charge to Host Artists