Any Space For Anne Kiguta At Citizen? 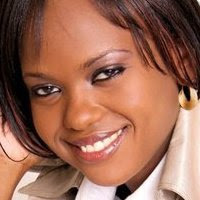 Speculation is rife that KTN presenter Anne Kiguta may be headed to Citizen TV. This is after she was spotted having a meal with Royal Media Services CEO, Wachira Waruru at a hotel in Lavington. The KTN journalist quickly recognizable by her striking looks may not be getting enough lime light at KTN due low ratings of the station.
It is not clear what the two were discussing, but not everyday will you find the CEO of a company having lunch with an employee of a rival, unless of course he wants to poach her. There has been a lot of movement in Kenyan media this year, especially after the entry of CCTV, which took some of the most recognizable names in Kenya. Among those who joined the Chinese include: Beatrice Marshal, Mark Masai and Robert Nagila. There has also been enough poaching within the local stations with the biggest being Mohammed Ali’s move from KTN to NTV.
KTN and by extension Standard Group has been having big problems that recently led to the sacking or to put it in another way, compulsory ‘resignation’ of Paul Melly as the company Chief executive. Many experienced journalists have been leaving the station for a quite a while now and it looks as if the former Capital Fm employee is headed that route.
If she indeed joins Citizen TV, Anne Kiguta will have taken the same steps Lilian Muli took.
© nairobiwire.com
Mohammed Ali: Iteere, Tobiko And Gichangi Hold Meetings To Discuss Me. < Previous
Robert Alai Under Attack For Not Paying 3 Month Electricity Bill. Next >
Recommended stories you may like: